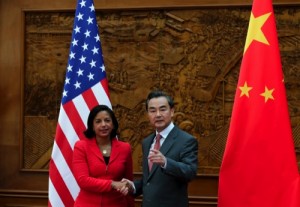 U.S. National Security Adviser Susan Rice repeatedly raised concerns about risky Chinese fighter intercepts of U.S. surveillance flights in meetings this week with Chinese leaders in Beijing, senior administration officials said yesterday.
The matter appeared to be one of a relatively few contentious issues raised during a visit intended to lay the groundwork for President Barack Obama’s trip to Beijing in November.
Overall, the talks “helped lay a really great foundation” for Obama’s trip, said a senior administration official who briefed reporters on condition of anonymity. Obama is to attend the Asian Pacific Economic Cooperation forum leaders’ summit and meet with Chinese President Xi Jinping.
Rice’s comments on fighter intercepts mark the second time the U.S. has raised the issue with China in the past two weeks, underscoring U.S. concerns about the danger of a collision and the effect such an incident could have on bilateral relations.
Washington has said that a Chinese pilot acted recklessly on Aug. 19 during close passes of a U.S. plane about 220 kilometers south of Hainan island, which is home to Chinese naval airfields and a submarine base. China denied any reckless flying and said it would continue responding to U.S. surveillance flights off its coast, which Beijing believes are a threat to its security.
In a meeting yesterday with China’s top general, Fan Changlong, Rice said their two countries “face challenges and we certainly need to avoid any incidents that could complicate the relationship.”
“Military-to-military ties between the United States and China have grown and strengthened. And it is an area of cooperation that the United States values,” Rice said in her opening remarks.
Administration officials declined to characterize the Chinese officials’ response, but said they appeared to understand U.S. concerns. The officials said the two sides agreed to work on confidence building measures to reduce suspicions, but offered no details.
“I’d say we had a constructive conversation with the Chinese” on the issue, said a U.S. official, who added that Rice raised the issue both with Fan and in a meeting Monday with Xi’s senior foreign policy adviser, Yang Jiechi. “The general perception is that they took our concerns very seriously,” the official said.
U.S. officials are most concerned about the possibility of a collision such as that in 2001 between a Chinese fighter and a U.S. Navy EP-3 on a surveillance flight about 100 kilometers from Hainan. The Chinese jet crashed, killing the pilot, and the U.S. plane was forced to make an emergency landing on Hainan, where the 24 crew members were detained and interrogated by Chinese authorities. Relations between the sides remained frosty for months afterward.
Despite occasional tensions, China and the U.S. have increased friendly engagement between their militaries in recent years. China’s navy took part this year for the first time in multinational naval drills hosted by the U.S. off the coast of Hawaii.
U.S. officials said Rice discussed a wide range of issues including economic ties, democracy in Hong Kong and the rise of the radical group calling itself the Islamic State in Iraq and Syria. They said Washington hopes to enlist Beijing’s help in opposing the group but offered no details.
Xi referenced the breadth of the challenges in his meeting with Rice, and said it was important to face them together through a strong bilateral relationship based on “mutual respect and win-win cooperation.”
“Right now the international situation continues to undergo profound and complex changes. So it has become even more important than ever for China and the United States to work together,” Xi said.
Rice responded by affirming the importance of the ties and the need to “manage and minimize our differences” to avoid impeding cooperation.
“President Obama firmly believes that the U.S.-China relationship is one of the most consequential bilateral relationships in the world, and that there is virtually no problem of global significance that can’t be better resolved when the United States and China are working together at the same table,” Rice said. Christopher Bodeen, Beijing, AP