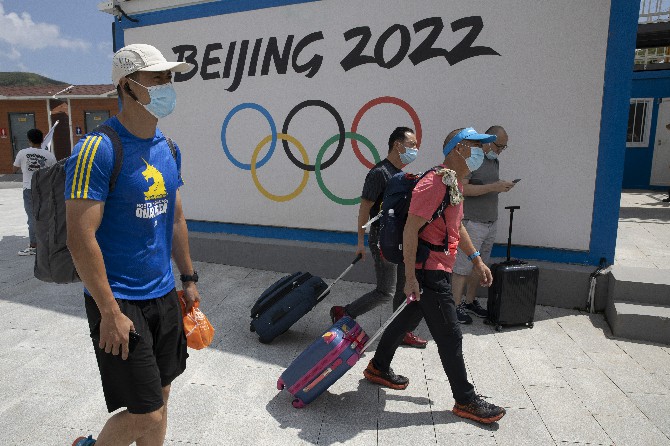 Beijing is to host the 2022 Winter Olympics with rumblings of a boycott and calls to move the games because of alleged human rights violations.
A coalition of human rights groups delivered that demand to International Olympic Committee President Thomas Bach ahead of the body’s executive board meeting in Switzerland yesterday. In a letter, the group asked the IOC to “reverse its mistake in awarding Beijing the honor of hosting the Winter Olympic Games in 2022.”
Chinese foreign ministry spokesperson Zhao Lijian accused the groups of trying to politicize sports, which he said is against the spirit of the Olympic Charter.
China has repeatedly denied human rights abuses. It at first said the camps for Uighurs didn’t exist, and then said they were job training centers to combat terrorism.
“Through vocational education and training, Xinjiang has taken preventive counter-terrorism and de-radicalization measures, effectively contained the once frequent terrorist activities, and protected the right to life, health and development of all ethnic group,” another spokesperson, Hua Chunying, said last week. “Over the past four years there hasn’t been a single terrorist attack in Xinjiang.”
These are precarious times for the Swiss-based IOC. Its finances — and those of 200 national Olympic committees and dozens of Olympic-related sports federations — have been shaken by the postponement of the Tokyo Olympics until 2021 because of COVID-19.
Bach warned two months ago against boycotts but said he was not referring specifically to Beijing. The Swiss-based body generates 73% of its revenue from selling television rights and 18% from sponsors and has seen its income stalled by the Tokyo delay.
After European cities such as Oslo and Stockholm dropped out, the IOC was left with only two bidders for 2022: Beijing and Almaty, Kazakhstan. Beijing won by four votes, taking the Winter Olympics to a country with no tradition — but a giant, untapped market.
Juan Antonio Samaranch Jr., the IOC member who oversees the Beijing Games, declined to answer questions from The Associated Press about reported human rights violations in Xinjiang and referred to comments from the IOC.
“Awarding the Olympic Games to a national Olympic committee does not mean that the IOC agrees with the political structure, social circumstances or human rights standards in the country,” the IOC said in a email to the AP.
The IOC said it has “received assurances that the principles of the Olympic Charter will be respected in the context of the games.” It added it must remain “neutral on all global political issues.” MDT/AP