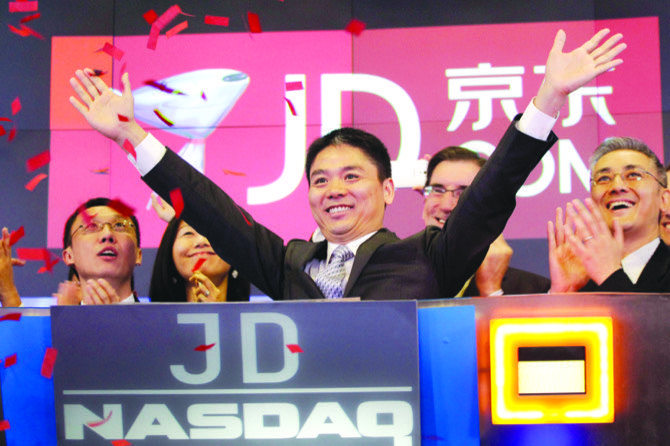 Richard Liu, CEO of JD.com celebrates the IPO for his company at the Nasdaq MarketSite in New York back in 2014

A woman who said she was raped by JD.com founder Richard Liu filed a lawsuit yesterday (local time) against the billionaire and his company alleging he and other wealthy Chinese executives coerced her to drink during a dinner in the hours before she was attacked.

Liu Jingyao, a student at the University of Minnesota, claims Liu forced himself upon her in his vehicle after the dinner and later raped her at her apartment. The lawsuit seeks damages of more than USD50,000.

Richard Liu, founder of the Beijing-based e-commerce site JD.com, was arrested Aug. 31 in Minneapolis on suspicion of felony rape and released within hours. Prosecutors announced in December that he would face no criminal charges because the case had “profound evidentiary problems” and that it was unlikely they could prove his guilt beyond a reasonable doubt.

Liu’s defense attorneys said at the time that his arrest was based on a false claim. Liu released a statement on Chinese social media then saying he broke no law, but that his interactions with the woman hurt his family, especially his wife, and he hoped she would accept his apology.

Jill Brisbois, an attorney for Richard Liu, said in a statement that based on the lack of charges and her belief that Liu is innocent “we feel strongly that this suit is without merit and will vigorously defend against it.”

Peter Walsh, lawyer for JD.com, said: “We are not in position to comment at this time, but we will vigorously defend these meritless claims against the company.”

The alleged attack happened while Richard Liu was in Minneapolis for a weeklong residency as part of the University of Minnesota’s doctor of business administration China program. The four-year program in the university’s management school is geared toward high-level executives in China and is a partnership with Tsinghua University School of Economics and Management.

Liu Jingyao is a Chinese citizen studying at the university on a student visa, and was a volunteer in the doctorate program while Richard Liu was there. The Associated Press does not generally name alleged victims of sexual assault without their consent; her attorney Wil Florin said Liu Jingyao had agreed to be named.

The lawsuit said she was 21 at the time of the alleged attack. Florin said Richard Liu and Liu Jingyao are not related.

On the night of the alleged attack, Richard Liu and other executives went to Origami, a Japanese restaurant in Minneapolis. The woman went as a volunteer at the invitation of Charlie Yao, another executive in the program. He pitched it as an event to honor volunteers, but no others were invited and Richard Liu had privately asked Yao to invite the plaintiff, the lawsuit said.

Liu Jingyao felt coerced to drink as the powerful men toasted her, with Richard Liu saying she would dishonor him if she did not join in, according to the lawsuit.

Text messages reviewed by The Associated Press and portions of the woman’s interviews with police show the woman claims Liu pulled her into a limousine and made advances despite her protests. The woman texted a friend: “I begged him don’t. But he didn’t listen.”

The lawsuit said a Liu aide turned the limousine’s rearview mirror upward so the chauffeur could not see Liu groping the student in the rear despite her protests. It says Liu forcibly raped her at her apartment, again over her protests and resistance.

Liu, known in Chinese as Liu Qiangdong, is a prominent member of the Chinese tech elite, with a fortune of $7.5 billion. He is part of a generation of entrepreneurs who have created China’s internet, e-commerce, mobile phone and other technology industries since the late 1990s.  Amy Forliti, Minneapolis, AP