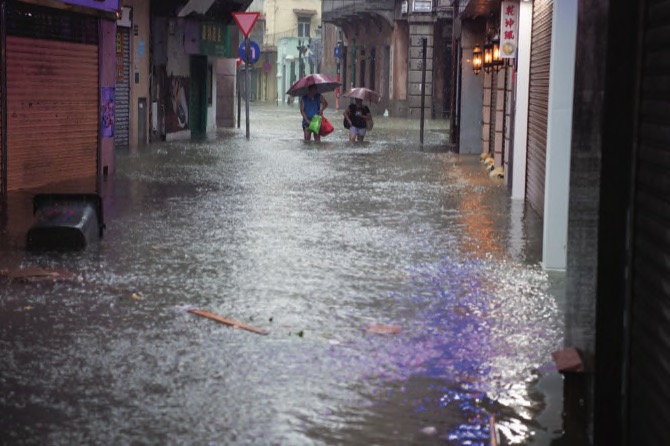 Secretary for Security Wong Sio Chak has reaffirmed his stance in favor of establishing the rumor crime, even after having admitted that none of the ten deaths recorded during Hato were related to rumors. Neither were any of the serious but non-fatal accidents seen during both Hato and Mangkhut.

Wong made his remarks yesterday on the sidelines of the meeting between the security authority and the First Standing Committee of the Legislative Assembly. “All ten deaths [recorded during Hato] were not related to these [rumors],” said Wong.

Upon being questioned by the media, Wong said that “we establish laws comprehensively. We do not simply establish the law only for this specific matter.”

“Things not having happened does not mean they will not happen in the future. We need to make a comprehensive evaluation and we will refer to international standards,” Wong added.

In addition to his firm stance on the establishment of a rumor crime, Wong also highlighted that the government did not use the term “rumor” in the bill; instead, it used the terminology “false information.”

Wong repeatedly claimed that the local government proposed the rumor crime in pursuit of the public’s safety.

In addition, he mentioned some statistics to testify the legitimacy of the proposal. “We [the security force] have issued eight articles explaining the proposal. The information bureau issued articles, and ten organizations also publicly voiced their support for the rumor crime.”

Aside from the rumor crime, the civil protection law also proposes a mandatory evacuation under “extremely dangerous” situations, with the evacuation including the media.

The secretary explained that “we will try to persuade [people to evacuate], and I hope not to use force or public power for the mandatory evacuation.”

“There will be no violation of law” if the media choose to not evacuate, according to Wong.

Meanwhile, in addition to his comment on the civil protection law, Wong also responded to matters concerning the current situation in Hong Kong.

Recently, several countries issued alerts to their citizens regarding trips to both Hong Kong and Macau.

“Many countries may not know the geography of Macau and Hong Kong very well. The alerts have some impact on Macau’s image,” said Wong, adding that “when they see [news about] Hong Kong, they might think that Macau is like that as well.”

In addition, according to Wong, the security force has been discussing the celebration of the 20th anniversary of the handover since June.

Regarding suggestions that the mainland’s top official will be present for the celebrations, the Secretary answered, “I do not dare to say” whether the Chinese President Xi Jinping will visit Macau to attend the handover anniversary.

“The 20th anniversary of the handover needs security and stability, and, with these goals in mind, we must do comprehensive work and consider any kind of unstable factors,” said Wong. “As of today, Macau is safe, stable and harmonious.”