YEMEN Police opened fire on demonstrators led by Shiite rebels who were marching toward the prime minister’s office in the capital yesterday, killing at least four people and wounding 10, officials said. Police first fired tear gas then switched to live ammo at the rally, led by so-called Hawthi rebels who have been fighting against Sunni tribesmen in the country’s north over the past months and now want to topple the government.

LIBERIA World Health Organization figures show that a surge in new cases in Liberia has driven up the number of people believed to be infected with Ebola to more than 4,200. That new toll includes more than 500 news cases in Liberia in just a week. The U.N. health agency has said that it expects thousands of new infections in Liberia, the hardest hit country in the current outbreak, in the coming weeks.
AFGHANISTAN President Hamid Karzai urges the country’s two presidential candidates to reach an agreement on a new national unity government at a state function that devolves into raucous shouting by agitated supporters of candidate Abdullah Abdullah. Karzai, who has been in power in Afghanistan since shortly after the 2001 U.S.-led invasion, said his time as president is over and that the country wants a new government. He told the crowd of hundreds of powerbrokers to urge Abdullah and Ashraf Ghani Ahmadzai to reach a deal to end the country’s now 5-month-long election process.

PAKISTAN-INDIA The death toll from floods in Pakistan and India reaches 400 as armies in both countries scramble to help the victims and authorities in Islamabad warn of more flooding in the days ahead. The flash floods, which began Sept. 3, have put more than half a million people in peril and rendered thousands homeless in the two neighboring states. 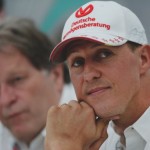 SWITZERLAND Former Formula One champion Michael Schumacher (pictured) has left a Swiss hospital and will continue his recovery at home, his manager said yesterday. The seven-time F1 champion suffered a serious head injury while skiing in France at the end of December. “Considering the severe injuries he suffered, progress has been made in the past weeks and months,” his manager, Sabine Kehm, said in a statement. “There is still, however, a long and difficult road ahead.”

USA Republican House of Representatives Speaker John Boehner said yesterday that Islamic State group militants pose a serious threat that must be dealt with in Iraq, Syria or wherever they exist as he pressed President Barack Obama to spell out the U.S. strategy to destroy the militants. The president was scheduled to meet with House and Senate Republican and Democratic leaders yesterday afternoon and deliver an address on the issue today.