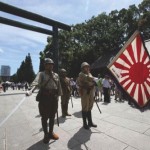 JAPAN A man died after setting himself on fire in a public park in apparent protest over Japan’s decision earlier this year to lift a ban on the military’s right to collective self-defense. Responding to reports of a fire, a police officer found the man engulfed in flames in central Tokyo’s Hibiya Park, Kyodo News Agency said. He was taken to a hospital where he was pronounced dead.

JAPAN More than three years into Japan’s massive cleanup of the tsunami-damaged nuclear plant, only a tiny fraction of the workers are focused on the key tasks of dismantling the broken reactors and removing radioactive fuel rods. Instead, nearly all the workers are devoted to a single, enormously distracting problem: coping with the vast amount of water that becomes contaminated after it is pumped into the reactors to keep the melted radioactive fuel inside from overheating.

INDIA A team of doctors rushes to central India after at least 12 women died and dozens of others fell ill following sterilization surgeries in a free, nationwide program aimed at limiting births in the world’s second-most populous nation. More on p13

AFGHANISTAN Opium poppy cultivation in Afghanistan hit a record high this year, rising by 7 percent over the 2013 figure and accounting for 90 percent of the world’s heroin supply, officials and the United Nations say. The U.N.’s Office on Drugs and Crime said in a report that the increased cultivation could produce 6,400 tons of opium, or 17 percent more than in 2013.
PAKISTAN A spokesman for a small Pakistani militant group claims that a delegation from the Islamic State group has visited Jundallah’s leaders in southwestern Pakistan.

PHILIPPINES More than 130 Filipino soldiers and police back home from peacekeeping duties in Liberia are headed to an island quarantine as a precaution against the Ebola virus. Although they passed rigid U.N. Ebola screening before they left the West African nation, they will still spend another 21 days on Caballo Island at the mouth of Manila Bay, the military said.

ISRAEL An attack against a mosque in a West Bank village ignites a fire that destroys its first floor. The village’s mayor is blaming Jewish settlers for the attack. In a related incident, Israeli police said a Molotov cocktail was thrown at an ancient synagogue in the Israeli-Arab town of Shfaram late on Tuesday night, causing light damage. The attacks come as Israeli-Palestinian tensions are soaring, mostly against the background of competing claims to a holy site in Jerusalem’s Old City.

FRANCE The French parliament is to vote on a symbolic resolution favoring recognition of a Palestinian state, hoping it could help end the decades-long conflict between Israelis and Palestinians.

NETHERLANDS The Netherlands’ highest administrative court refused yesterday to wade into the increasingly acrimonious national debate around “Black Pete,” the sidekick to the Dutch equivalent of Santa Claus. Opponents call Pete, who is often played by white people wearing black-face makeup and a frizzy Afro wig, a racist caricature. Most Dutch people insist he is a harmless fantasy figure.

UKRAINE The U.N. Security Council is preparing to hold an emergency session on Ukraine amid worries about a renewal of full-scale conflict in the rebel-held east.