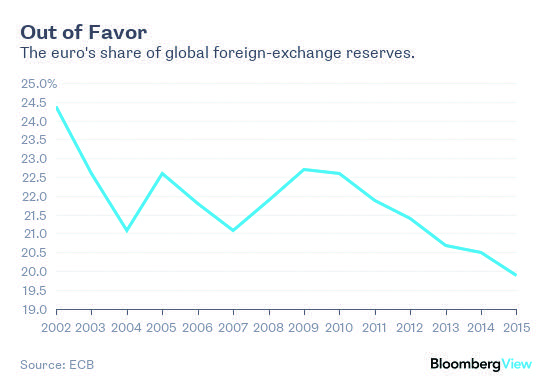 Once upon a time, the euro had aspirations to challenge the dollar’s status as the world’s reserve currency of choice. Instead, the common European currency is losing favor as a store of value. And as European banks scale back their trading activities, the euro’s role on the global stage is likely to diminish further.
Almost a decade ago, Deutsche Bank was predicting that the euro could account for as much as 40 percent of global foreign-exchange reserves. Instead, according to a new report from the European Central Bank, its usage has declined every year this decade and dipped below 20 percent at the end of last year, beating the yen’s 4.1 percent share but a distant second to the dollar’s 64.1 percent proportion:
The euro remains the world’s second most-­used currency for international payments, but its share of total transactions is down to 31.47 percent from 33.52 percent at the start of 2014, according tofigures compiled by the Society for Worldwide Interbank Financial Telecommunication. (China’s yuan, by contrast, has climbed to fifth place from seventh, albeit with a share of just 1.76 percent.)
Another potential cloud on the euro’s horizon is the June 23 U.K. vote on whether to abandon the European Union. Britain dominates currency market activity, handling 41 percent of all foreign exchange trading, according to the most recent report from the Bank for International Settlements. That’s more than double the 19 percent share for the U.S. or third-placed Singapore’s 5.7 percent.
But if Britain finds itself outside of the EU, the ability of London traders to trade euro-denominated securities will diminish — the interest-rate swaps market, for example, is likely to head to Paris — and their accompanying appetite to trade the currency itself will also shrink. And while some of that pure currency business will just cross the Channel along with the securities, a proportion of it will probably just disappear for good.
The biggest risk to the euro’s standing, though, is the relentless contraction of Europe’s investment banks. At the start of the decade, for example, Deutsche Bank controlled more than 18 percent of the currency market, while Barclays had more than 11 percent. Those proportions have shrunk to 7.9 percent and 5.7 percent respectively, according to the latest market survey from Euromoney.
While U.S. banks also trade euros, it’s pretty clear that as European firms become less active in the currency market, their domestic currencies are also likely to be less actively bought and sold. The British pound, for example, has also lost ground, with the Swift figures showing its presence in global payments dropping to 8.78 percent from 9.37 percent in the past two years. The Swiss franc, by contrast, has gained modestly to 1.52 percent from 1.38 percent as UBS’s FX market share has recovered to 8.8 percent from 7.3 percent a year ago.
There’s more to having a successful currency than just bragging rights. While it’s impossible to put a dollar (or euro) value on liquidity, the credit-crunch taught us that when trading dries up, your financial system suffers disproportionately. Unfortunately for the euro, the evidence suggests that surviving the existential crisis of the last few years has done nothing to boost its global popularity. Mark Gilbert