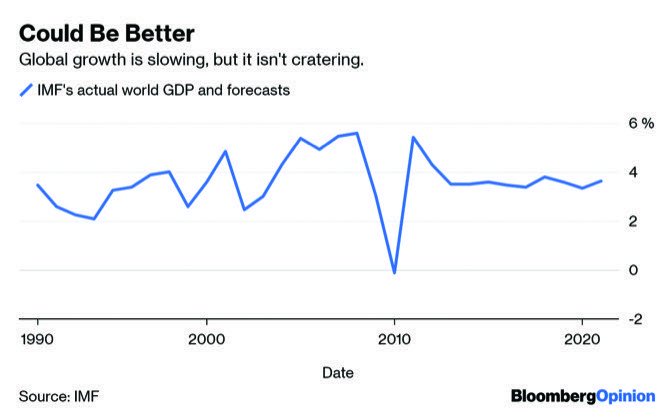 What’s all the fuss about?

Maybe the world economy isn’t in such terrible shape after all. New projections from the International Monetary Fund, published this week, show that expansion still has some legs. Growth will be a not-too- shabby 3.3 percent this year.

That’s down from a previous forecast of 3.5 percent. So, yes, it’s a cut. But not a dramatic one. These numbers are a ways from one IMF definition of recession, 2.5 percent, and miles from the contraction recorded in 2009. Superlatives about the lowest growth since the Great Recession are misleading.

These updates from the IMF also make you wonder where all the drama – so prevalent in headlines – is coming from. A bounce in U.S. job growth last month, signs of a partial recovery in China and a dovish pivot from big central banks give some comfort.

Let’s not get too giddy, though. A recession in, say, the U.S. is inevitable at some point. The current expansion will this year become the longest ever. Germany is flirting with recession and China is on a long-term trajectory of slower growth.

On the surface, the IMF numbers don’t say anything dire. Their direction does make an impression – this was the third time the lender has marked down its numbers in six months. You have to give them credit for staying current. Is the IMF’s track record perfect? Far from it. (I’m writing this column from Indonesia, scene of one of the IMF’s most contentious programs).

Private sector doomsayers deserve equal scrutiny. Next time you see a survey showing recession odds, question why and how far it deviates from consensus. Same with the hagiographies accorded some individual investors whose prognostications just glide by without review. I’m all for putting the IMF under the microscope; let’s do the same for others.

The list of risks outlined by the IMF in its World Economic Outlook could use a little refreshing. Trade wars? Check. Brexit? Sigh. What else you got?

IMF chief Christine Lagarde calls this a “delicate moment” for the world economy. Central banks have a role to play as well, in the U.S., Europe and Asia.

As I wrote late last month, the idea of interest rate cuts from the Federal Reserve was a fringe theory that’s now come into the mainstream, even if it’s not quite consensus. If cuts do come to pass, it won’t be because the Oval Office wants it. It will be because of reasoned analysis that inflation is too low, or at risk of being so, and that risk management requires the Fed to take out some insurance.

It’s entirely possible the world economy muddles through this year. It might be messy and there will be regional divergences aplenty.

The economy may not feel great, particularly depending on where you are. That doesn’t mean it’s terrible. Daniel Moss, Bloomberg