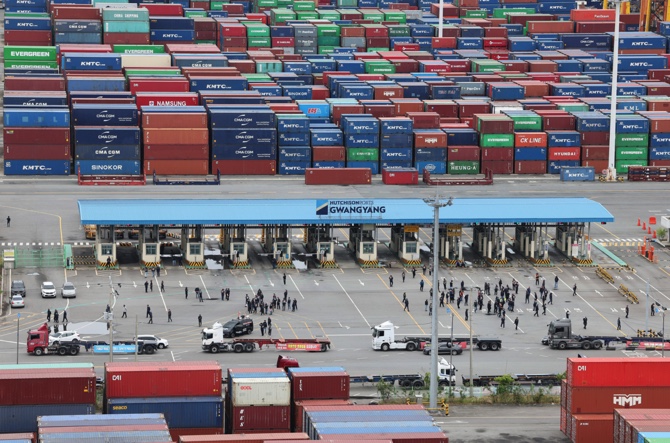 South Korea’s prime minister warned yesterday that the disruption of cargo transport could cause “irrecoverable” damages on the country’s economy, as a nationwide truckers’ strike entered its eighth day.

About 6,800 truckers were rallying Monday at various sites across South Korea, continuing to trigger a delay in the shipment and delivery of key items like steels, cement, petrochemicals and tires, the Transport Ministry said in a statement.

The statement said some steel and cement-related factories halted their operations. It accused some striking truckers of obstructing cargo transports at some major southeastern ports.

During a Cabinet meeting, Prime Minister Han Duck-soo, South Korea’s No. 2 official, called the reported transport obstruction “illicit activities” that he said will never receive public support, according to Cho Yong-man, the 2nd vice culture minister who serves as a government spokesperson.

Cho cited Han as saying that the disruption of cargo transport could pose “a big irrecoverable blow” to South Korea’s economy, which already faces other difficulties.

The Ministry of Trade, Industry and Energy said in a statement Monday that the first six days of the strike caused an estimated 1.6 trillion won ($1.2 billion) in damages.

Striking truckers are calling for an extension of temporary measures guaranteeing minimum wages amid soaring fuel prices. They met with government officials several times but each meeting ended without any breakthroughs.

Police said Monday morning that they had detained 44 striking truckers but released most of them except for two who were formally arrested. Two additional truckers were detained yesterday, the Transportation Ministry said.

South Korean officials and experts say the strike’s damage has so far been limited to the country’s domestic industry, though a prolonged strike may undermine the global supply chains already hit by Russia’s assault on Ukraine and China’s COVID-19 restrictions. There have been no reports of substantial disruptions of key South Korean export items such as semiconductors and automobiles yet, Industry Ministry officials said. HYUNG-JIN KIM, SEOUL, MDT/AP