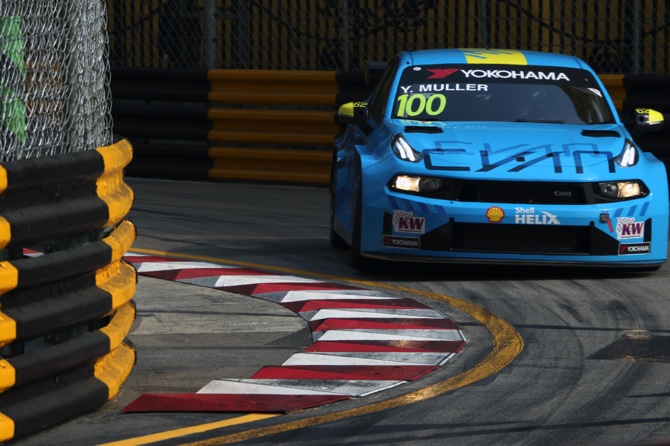 Frenchman Yvan Muller scored two wins out of the three races this weekend in Macau for Cyan Racing – Lynk & Co.

With the wins, Muller bagged significant points which will make a four-sided battle for the final races and may be a title decider at the season finale, taking place at Malaysia’s Sepang International Circuit next month.

With the results obtained in the Macau round, the quartet is now separated by a maximum of 28 points.

Muller won the first two races of the weekend. On Saturday, he beat Michelisz and Kevin Ceccon in the Alfa Romeo, who placed second and third respectively. On Sunday morning, he beat teammate Björk, who was first runner-up, and Ceccon who had two third places.

Priaulx had a strong start and overtook pole-sitter Huff, taking the lead off the line and managing to hold the quartet behind him for all 11 laps, securing his first WTCR race victory.

In the process, Huff missed the chance to achieve his 10th Macau race win.

After the race, Huff commented on the start saying, “It was a normal start – I’ve always struggled to get the [Volswagen] Golf off the line. It is what it is. We were down on the straights as always. But it was a good race and to be beaten by Andy, I don’t mind really. It’s always enjoyable to race with him.”

As the season finale is approaching, the title race has tightened up further as points leader Michelisz finished 12th position while his closest rival Guerrieri closed the race two places ahead in 10th. Muller, who had won the first two races, closed the day in the sixth position.

Closing the podium of the final race of the day was another Frenchman, Jean-Karl Vernay in the Audi RS 3 LMS who tried to take advantage of the grid positioning to push himself to the front as much as possible, pressuring Huff lap after lap on the braking area at the Lisboa bend.

At the end of the race, Priaulx recalled his past victories and luck which he had always received from Macau, dedicating the victory to his daughter Daniella.

“I still have my Buddha with me in my wash bag from 2005. I can’t wear it anymore for the races because you are not allowed to wear necklaces or anything, but today I have two lucky charms: I have the Buddha with me and it’s my daughter’s 16th birthday. Every year I miss her birthday. She was born when I was racing in Macau, she came a month early and today’s her 16th birthday, so that was a special win for her,” Priaulx said.