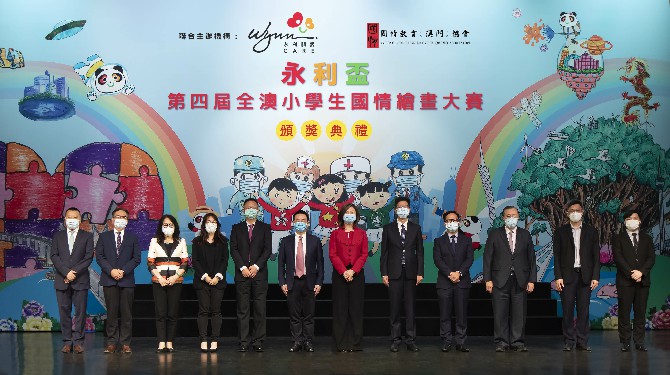 Co-organized by Wynn Resorts (Macau) S.A. and the National Conditions Education (Macau) Association, the fourth ‘Wynn Cup – Macau Primary School Student National Education Drawing Competition’ award ceremony was held at Wynn Palace on Friday. The competition attracted participation from 42 schools, approximately 10,000 primary school students and youngsters from cities across the Greater Bay Area.
“Although this year’s awards ceremony was delayed compared with previous years due to the pandemic, the enthusiasm of the participating schools has remained high, with the children’s creative imaginations being ever richer and their painting skills constantly improving,” said Linda Chen, President and Executive Director of Wynn Resorts (Macau), in her keynote speech.
The awards have been held annually since 2016. Each year, the competition sets a theme that resonates with mainland China and Macau. More than 40,000 local students have participated in the competition since its launch.
The winners were presented with honorary certificates, trophies and prizes. There were two newly-added special awards this year, including the ‘Most Childlike Influence’ and ‘Most Popular Online Group’ awards.