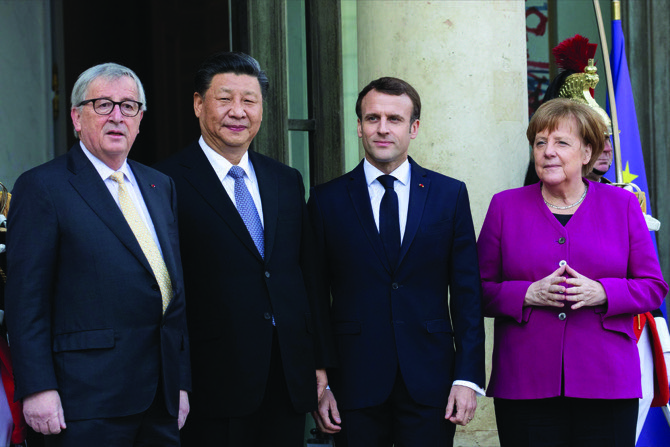 At the March 26 meeting, held together with French President Emmanuel Macron and German Chancellor Angela Merkel, the EU side explained that “it can’t stay like this, that Chinese companies have free access to our markets in Europe, but we don’t to the markets in China,” Juncker told lawmakers in the German state of Saarland on Monday.

He also said Chinese investments in the continent can make it harder in the EU to agree on foreign policy. “One country isn’t able to condemn Chinese human rights policy because Chinese investors are involved in one of their ports,” Juncker said. “It can’t work like this.”

Europe has become more vocal in its criticism of China as of late, calling the country a partner as well as an economic competitor and a “systemic rival” on governance. Concerns are mounting over China’s growing influence, predatory investments and possible hacking of 5G data networks.

The EU has also been divided over China’s Belt and Road infrastructure project, which some see as a threat to sovereignty. Italy’s populist government last month signed on to the initiative, brushing off the concerns.

Juncker said he’s not against the project “as long as the conditions are right.” If European companies can profit from it and “if you don’t only meet Chinese workers on these construction sites but also European workers, then this is all feasible,” he said.

On a trip to Europe last month, Xi sought to lay to rest suspicions about his global plans.

“We cannot let mutual suspicion get the better of us,” Xi said at a joint news conference with Juncker, Macron and Merkel. “We must not always be guarded against each other and worry that they may do something behind our back. That is very important. That is something we need to avoid.” Alexander Weber, Bloomberg