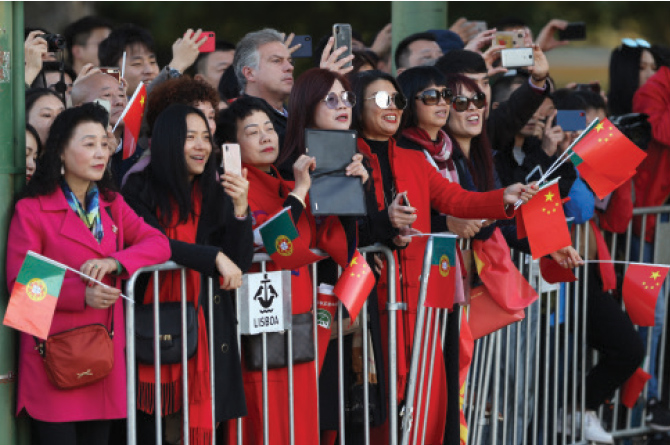 “We should continue to expand and improve our existing projects, increase trade and create other areas of growth,” Xi said at a joint press conference with Portuguese President Marcelo Rebelo de Sousa. “We should bolster our cooperation in other markets.”

Xi said the two countries enjoy a long history of friendly exchanges, adding that since the establishment of diplomatic ties 39 years ago, China and Portugal have always witnessed win-win cooperation with mutual understanding, respect and trust. Noting an ancient Chinese saying, “A partnership forged with the right approach defies geographical distance; it is thicker than glue and stronger than metal and stone,” Xi said China and Portugal are good friends and partners who are getting along with each other.

Rebelo de Sousa said that Portugal is willing to support the Belt and Road Initiative and accepted Xi’s invitation to take part in a summit about the Chinese project, to be held in Beijing in April.

Yesterday, Xi Jinping met Portuguese Prime Minister Antonio Costa. The two governments signed a memorandum of understanding on jointly advancing the construction of the Belt and Road after the meeting, which was witnessed by the two leaders.

The Chinese President visit to Portugal ended yesterday, the final stop in a global tour that has included Panama, Spain and the Group of 20 meeting in Argentina.

China became a major investor in Portugal during the country’s 2011-2014 international bailout program. In May, China Three Gorges Corp. offered 9.1 billion euros (USD10.3 billion) to raise its stake in Portuguese utility EDP-Energias de Portugal SA, which would be this year’s biggest Chinese overseas acquisition if accepted, according to data compiled by Bloomberg. Portugal already attracts wealthy Chinese with its so-called golden visa program that allows foreign individuals to buy property valued at 500,000 euros or more in return for residency.

DURING HIS stay in Lisbon, Xi Jinping and his delegation had the city’s top luxury hotel closed to other guests. For that, the Chinese reportedly paid EUR2 million to the Hotel Ritz, according to several media reports. The Chinese delegation brought several armored limousines which were so big that construction had to be done on the exit gate of the airport and the parking area of the hotel. According to the report, China paid for those works.