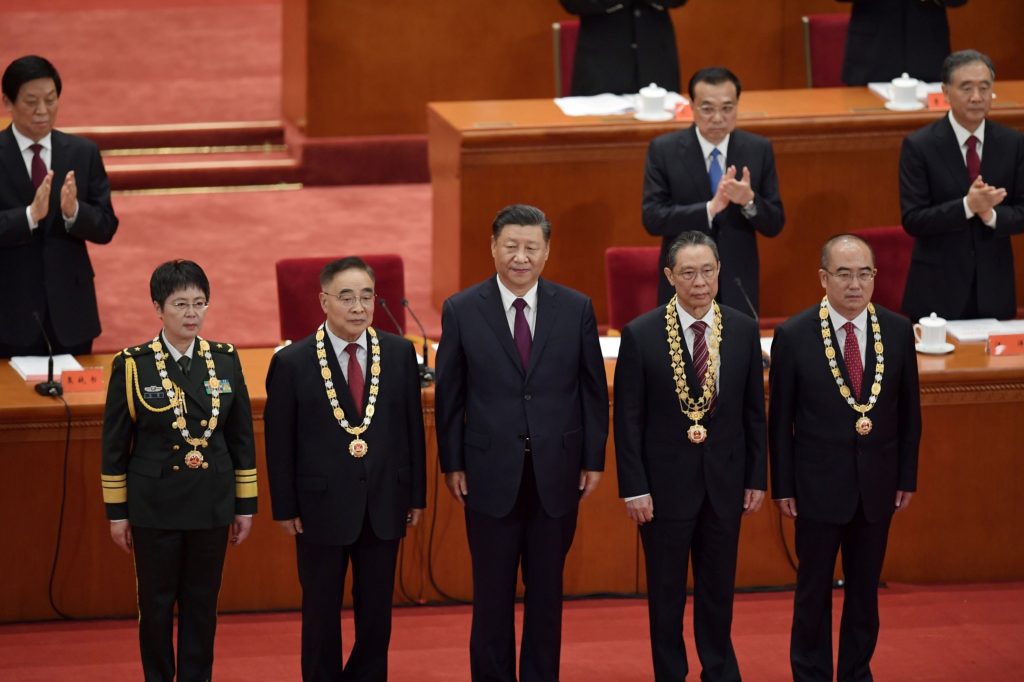 President Xi Jinping hailed China’s success in suppressing the deadly pandemic first discovered on its soil, even as confirmed infections globally raced toward the 30 million mark.

In a pomp-filled ceremony in the Great Hall of the People in Beijing, Xi personally conferred medals on citizens deemed to have played instrumental roles in China’s fight against the virus identified in December in Wuhan. While other nations from India to the U.S. grapple with ever-expanding outbreaks, China hasn’t reported a domestic infection in 22 days and Xi has increasingly turned his attention to bolstering the battered economy.

The proceedings glossed over criticism of Beijing’s early response to the pandemic, which had initially appeared to threaten the Communist Party’s legitimacy before China contained the virus and worse outbreaks in other nations overshadowed its struggles. Xi made no mention of the roughly three weeks that passed in January between efforts to censor doctors’ first warnings of human-to-human transmission and China’s official acknowledgment of the infection risk.

The president seized on China’s relative success to tout the merits of one-party rule, as leaders in democratically run countries grapple with protests against mask-mandates and extended lockdowns. None of the participants who shared the stage with Xi wore masks and the president shook hands with several people while leaving, a striking display of China’s progress.

“The CCP’s strong leadership is the most reliable backbone when a storm hits,” Xi said in a speech that stretched for more than 70 minutes. “The pandemic once again proves the superiority of the socialist system with Chinese characteristics.”

The event provided a sharp contrast against scenes unfolding elsewhere around the world, including the U.S., where the country’s coronavirus struggles have eroded President Donald Trump’s chances at winning re-election in November. Trump, who initially praised Xi’s response, has since accused China of deliberately causing the pandemic to hurt him politically.

Yesterday, Trump vowed to escalate efforts to roll back ties between the world’s two largest economies in retaliation for the virus. “We’ll prohibit federal contracts from companies that outsource to China and we’ll hold China accountable for allowing the virus to spread around the world,” Trump told reporters at the White House.

China’s state-run media has closely covered the coronavirus outbreaks afflicting rival nations. The country’s foreign ministry has repeatedly accused American politicians of attempting to deflect blame for their own political problems onto China.

Meanwhile, China appears poised to emerge from the pandemic-driven economic downturn before other large nations. The country reported a 3.2% year-on-year increase in economic output in the second quarter, reversing a 6.8% decline in the first three months of the year.

After an explosion of cases in the central province of Hubei sparked outbreaks around the country, China managed to contain the virus through a combination of strict lockdowns, forced quarantines, mass-testing and mask-mandates. Travel into and out of the country remains tightly controlled, preventing importing cases.

In late December, police in Wuhan admonished seven doctors who tried to warn their peers and friends that a new pathogen was in circulation. Among them was Li Wenliang, 34, who later contracted the virus and died of the disease, sparking a rare public outcry demanding freedom of speech and questioning of the country’s system of governance.

The government later embraced Li’s story, framing him as a martyr rather than a silenced whistle-blower. Authorities later launched investigations into other critics of the government’s response, including citizen journalists, Tsinghua University law professor Xu Zhangrun and property tycoon Ren Zhiqiang.

At the event yesterday, China honored about 1,500 individuals for their contribution in the virus fight, including medical personnel, military workers, state media workers and Foreign Ministry spokeswoman Hua Chunying. Respiratory disease specialist Zhong Nanshan – a senior medical adviser to the Chinese government who confirmed the risk of human-to-human infection on Jan. 20 – and vaccine researcher Chen Wei were among four medical experts bestowed with national awards by Xi.

Greg Gilligan, chairman of the American Chamber of Commerce in China, was one of the few foreign officials invited to attend the event, in recognition of efforts by the organization and its members toward China’s Covid-19 relief efforts, according to the chamber.

The Chinese president vowed to establish a long-term system for coordinating coronavirus-control efforts and develop the economy. He acknowledged that China continued to face the risk of sporadic virus infections.

“No country can stand alone in the face of major crises,” Xi said. “Those who care only about themselves, shift blame to others, confuse right and wrong and mix black and white, will not only cause harm to their countries and people, but also to the people of all countries in the world.”