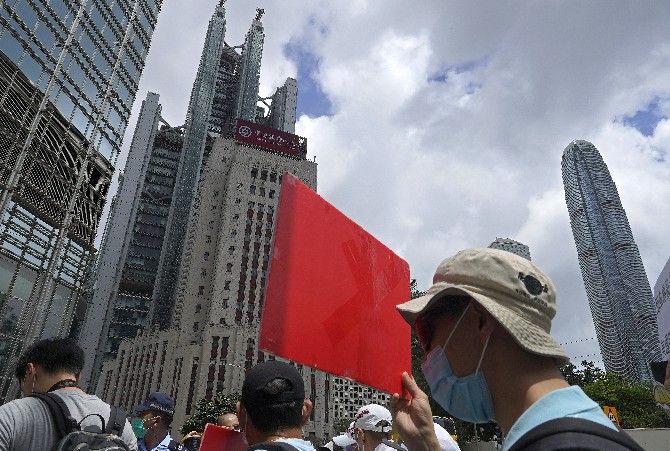 Pro-China supporters hold a placard on their way to protest at the U.S. Consulate in Hong Kong

China’s national security legislation for Hong Kong “reduces uncertainty by thwarting instability” for financial markets in the “Pearl of the Orient,” said a renowned U.S. expert on China.
“As far as threats that financial institutions will depart Hong Kong – as some have suggested – I think not,” Robert Lawrence Kuhn, chairman of the Kuhn Foundation, told Xinhua recently via email.
“Financial institutions seek financial returns, financial markets abhor uncertainty, and this new law reduces uncertainty by thwarting instability,” Kuhn noted.
The senior expert noted that it would be better to understand China’s rationale by putting the national security legislation for Hong Kong in the context of the Chinese dream, a great rejuvenation of the Chinese nation.
Kuhn said there are “two pillars” supporting this “Great Rejuvenation”: one is economic development, increasing the Chinese people’s living standards, as exemplified this year by the eradication of all extreme poverty, a remarkable accomplishment.
The other pillar is national sovereignty, which is an essential element of national pride, he noted, adding “Hong Kong’s disruptions have been a sore in the side of this pillar, and China’s leadership has determined that this sore must be healed. The move has the overwhelming support of the Chinese people.”
The Chinese central government wants to “expand Hong Kong, not constrain it,” especially as core of the Guangdong-Hong Kong-Macau Greater Bay Area development plan to build a world-class mega-region, the U.S. scholar said.
Accordingly, he said, the central government will “defer to Hong Kong as much as possible and as long as possible,” but there are “three red lines that cannot be crossed” – movement toward “Hong Kong independence,” using Hong Kong to undermine the mainland’s political system, and unending chaos which would threaten Hong Kong’s economic viability.
On Thursday, Chinese lawmakers voted overwhelmingly at the third session of the 13th National People’s Congress, the top legislature, to approve a decision on establishing and improving the legal system and enforcement mechanisms for the Hong Kong Special Administrative Region to safeguard national security. Xinhua