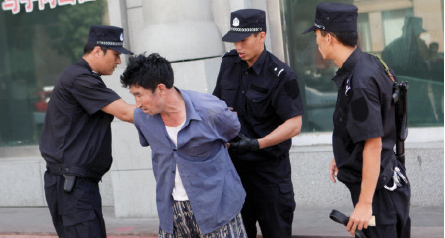 More than 300 terrorism suspects have been arrested in the past six months by authorities from China’s turbulent Xinjiang region as part of a nationwide crackdown, the Ministry of Public Security said.
Some 115 terrorist groups were quashed and 334 suspects detained, with another 52 turning themselves in during the six months to Nov. 22, according to a report posted on the ministry’s website Wednesday.
President Xi Jinping is overseeing a campaign against terrorists after blaming Uighur separatists, the Muslim ethnic minority that makes up about 45 percent of Xinjiang’s population, for bombings and other attacks in the province and across the country. Xinjiang authorities have preemptively targeted terrorists groups and activities that are mostly still in the stages, the public security report said.
Tensions between the Uighurs, who speak a Turkic language rather than Mandarin, and the Han Chinese population as well as police have flared repeatedly this year. On July 28, 96 people were killed in clashes in Xinjiang during celebrations to mark the end of the monthlong Ramadan festival. At least 50 people, including 40 people identified as rioters, were killed and dozens injured in violence on Sept. 21 in Xinjiang, mostly from suicide bombs or shot by police, according to state media
The targets of the Xinjiang anti-terror campaign included terrorist enablers, extremists and technicians who can make bombs, the report said. Police also spoke to families of suspected terrorists, leading to the 52 suspects turning themselves in, it said.
China this week put seven students of imprisoned Uighur scholar Ilham Tohti on trial on separatism charges for their involvement in his website.
The students on trial may face prison sentences of five years to 15 years on conviction, according to Li Fangping, the defense lawyer for Tohti. Some of the students pleaded guilty at a hearing in the Urumqi Intermediate People’s Court in northwestern China’s Xinjiang region, Li said.
Tohti was sentenced to life in prison in September after he was convicted of promoting separatism in Xinjiang in a verdict that underlines China’s intolerance toward criticism of its ethnic policies. The court also ordered the seizure of all of Tohti’s assets. The sentence was upheld on appeal this month.
In March, knife-wielding assailants killed 29 people at a train station in the southern city of Kunming, for which three Uighurs were sentenced to death this month. In June, three others were sentenced to death for planning a fatal car crash near Beijing’s Tiananmen Square that killed two tourists. Bloomberg