Xinjiang papers The man behind the detention of one million Muslims 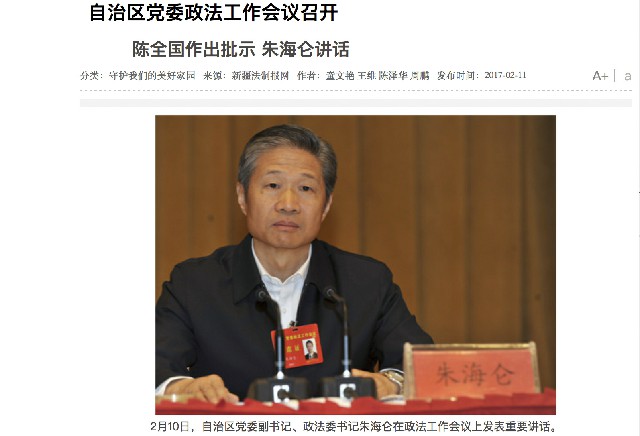 This screenshot taken from the Xinjiang Legal News Network website shows the former head of the Xinjiang Communist Party Political and Legal Affairs Commission, Zhu HailunXinjiang papers
The man behind the detention of one million Muslims

After bloody race riots rocked China’s far west a decade ago, the ruling Communist Party turned to a rare figure in their ranks to restore order: a Han Chinese official fluent in Uighur, the language of the local Turkic Muslim minority.
Now, newly revealed, confidential documents show that the official, Zhu Hailun, played a key role in planning and executing a campaign that has swept up a million or more Uighurs into detention camps.
Published in 2017, the documents were signed by Zhu, as then-head of the powerful Political and Legal Affairs Commission of the Communist Party in the Xinjiang region. A Uighur linguist recognized Zhu’s signature scrawled atop some of the documents from his time working as a translator in Kashgar, when Zhu was the city’s top official.
“When I saw them, I knew they were important,” said the linguist, Abduweli Ayup, who now lives in exile. “He’s a guy who wants to control power in his hands. Everything.”
Zhu, 61, did not respond to repeated requests for comment.
Long before the crackdown and despite his intimate familiarity with local culture, Zhu was more hated than loved among the Uighurs he ruled.
He was born in 1958 in rural Jiangsu on China’s coast. In his teens, during China’s tumultuous Cultural Revolution, Zhu was sent to Kargilik county, deep in the Uighur heartland in Xinjiang. He never left.
Zhu joined the party in 1980 and moved up Xinjiang’s bureaucracy, helming hotspot cities. By the ‘90s, he was so fluent in Uighur that he corrected his own translators during meetings.
“If you didn’t see him, you’d never imagine he’s Han Chinese. When he spoke Uighur, he really spoke just like a Uighur, since he grew up with them,” said a Uighur businessman living in exile in Turkey, who declined to be named out of fear of retribution.
The businessman first heard of Zhu from a Uighur friend who dealt with the official while doing business. His friend was impressed, describing Zhu as “very capable” — a Han Chinese bureaucrat the Uighurs could work with. But after years of observing Zhu oversee crackdowns and arrests, the businessman soon came to a different conclusion.
“He’s a crafty fox. The really cunning sort, the kind that plays with your brain,” he said. “He was a key character for the Communist Party’s policies to control Southern Xinjiang.”
Ayup, the linguist, met Zhu in 1998, when he came to inspect his township. He was notorious for ordering 3 a.m. raids of Uighur homes, and farmers would sing a popular folk song called ‘Zhu Hailun is coming’ to poke fun at his hard and unyielding nature.
“He gave orders like farmers were soldiers. All of us were his soldiers,” Ayup said. “Han Chinese controlled our homeland. We knew we needed to stay in our place.”
Once, at a meeting, Ayup said, Zhu complained to town officials that farmers upset over orders to grow certain crops were secretly supporting extremism. He suddenly interrupted to call the Quran, Islam’s holy book, “complete and utter nonsense.”
“Your ‘God’ is total rubbish,” Zhu said, to shocked silence.
Ayup said Zhu compared traditional Uighur culture to Afghanistan, saying it needed to modernize.
“He saw himself as a savior,” Ayup said. “He thought he came here to bring modernity, modern life, modern ideology to Uighurs.”
Months after a July 5, 2009 riot left hundreds dead in the region’s capital of Urumqi, Zhu was tapped to replace the city’s chief. Beijing almost always flew in officials from other provinces for the job, in part as training for higher posts. But central officials on a fact-finding mission in Urumqi concluded that Zhu, seen as tougher than his predecessor, needed to take charge.
“They were super unhappy,” said a Uighur former cadre who declined to be named out of fear of retribution. “It had never happened before, but because locals said he was outstanding at maintaining stability, he was snatched up and installed as Urumqi Party Secretary.”
Upon appointment, Zhu spent three days holed up in the city’s police command, vowing to tighten the government’s grip. Police swept through Uighur neighborhoods, brandishing rifles and rounding up hundreds for trial. Tens of thousands of surveillance cameras were installed.
But instead of healing ethnic divisions, the crackdown hardened them. Matters came to a head in April 2014, when Chinese President Xi Jinping came to Xinjiang on a state visit. Just hours after his departure, bombs tore through an Urumqi train station, killing three and injuring 79.
Xi vowed to clamp down even harder.
In 2016, Beijing appointed a new leader for Xinjiang — Chen Quanguo. Chen, whose first name means “whole country”, had built a reputation as a hard-hitting official who pioneered digital surveillance tactics in Tibet.
Zhu was his right-hand man. Appointed head of the region’s security and legal apparatus, Zhu laid the groundwork for an all-seeing state surveillance system that could automatically identify targets for arrest. He crisscrossed the region to inspect internment centers, police stations, checkpoints and other components of an emerging surveillance and detention apparatus.
After Chen’s arrival, Uighurs began disappearing by the thousands. The leaked documents show that Zhu directed mass arrests, signing off on notices ordering police to use digital surveillance to investigate people for having visited foreign countries, using certain mobile applications, or being related to “suspicious persons”. State television shows that Zhu continued on his relentless tour of Xinjiang’s camps, checkpoints, and police stations, personally guiding the mass detention campaign.
Zhu stepped down last year after turning 60, in line with traditional practice for Communist Party cadres of Zhu’s rank. Chen remains in his post.
“Chen Quanguo came in the name of the Party,” said the Uighur businessman. “Zhu knows how to implement, who to capture, what to do.” AP

Germany says China should give U.N. human rights officials unhindered access to camps in its western region of Xinjiang, after leaked documents indicated they are used to forcibly re-educate minorities.
Foreign Ministry spokeswoman Maria Adebahr said Germany was “following with great concern” recent news reports about the camps, where about 1 million people are being held.
Government spokesman Steffen Seibert said Germany has previously joined other countries in calling for U.N. experts to be allowed to visit the camps and produce an independent assessment of the situation there.
Seibert told reporters in Berlin that “we must now concentrate on verifying these reports.”
China’s embassy in the United Kingdom has said the documents, which were leaked to a consortium of international journalists, “are fabrication and fake news.”