Youth meeting | Bringing a part of the city back home 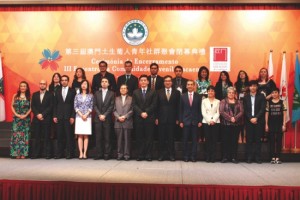 Overseas-based Macanese youth expressed their collective gratitude yesterday to the organizers of the third edition of the Macanese Community Youth Meeting on the last night of their trip to the city.
“I am sure that the representatives of Macau who are living overseas will bring a little part of the city back home with them. Macau will always stay in their hearts and I believe they will keep promoting the city in their own countries,” addressed Duarte Alves to members of the Macanese diaspora at the closing ceremony held at the Macau Tower.
Afterwards, representatives from the Casas de Macau (Houses of Macau) around the globe shared their feelings about the seven-day event, in which they were exposed to the cultural side of the city. During the weekend, they experienced the excitement of the city’s annual dragon boat races and attended a Portuguese folk dance event.
However, the stormy weather over the past few days spoiled the group’s opportunity to row dragon boats on the Nam Van Lake on Monday.
Asked what impressed them most during their excursion to the mainland, Erin Ozorio from Toronto told the Times that she was struck by the significance of Chinese culture in the city.
“We basically visited lots of tourist sites, a couple of temples, general post offices, we’ve got to know the city that way,” she said, “China was really good, we also went to quite a few museums to learn about the history and especially their ‘democracy.’ I’ve also tried a bunch of the traditional cuisines.”
Almost all of the representatives from the worldwide Macau houses present at the dinner last night told the audience that their trip to Macau helped them to identify their cultural roots. Staff reporter