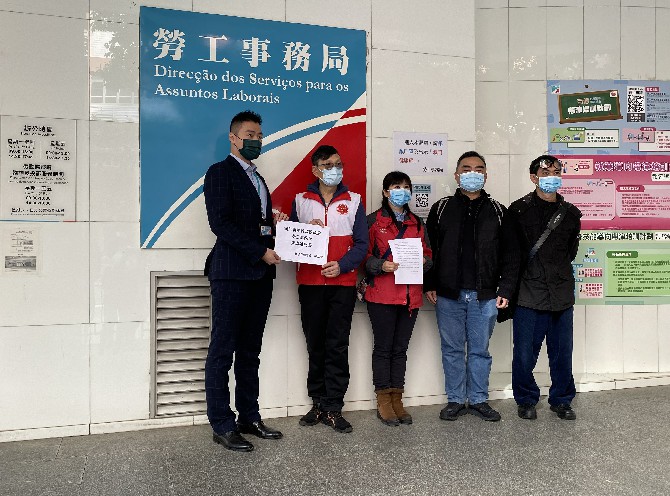 The New Macau Gaming Staff Rights Association represented some 10 casino staff — who allegedly will be soon dismissed unjustifiably by a satellite casino — to deliver a petition letter to Wong Chi Hong, the director of the Labour Affairs Bureau (DSAL).
The satellite casino, a sublicensee of one of the six concessionaires, allegedly forced the staff to resign or be laid off and blacklisted by the casino industry.
A female employee— who is one of some 10 concerned staff and wishes to stay anonymous — told the Times yesterday that she was warned by the employer that if she does not stand down, she would not be able to work for other casinos in the city as well.
She relayed the words of her employer at the time as being along the lines of: “If you wish to continue to work in this industry, you’d better think through it [resignation],” emphasizing how she was pressured to resign.
The casino had established within its company policy that a staff member could be dismissed if they received three warning letters about mistakes they had made on gambling tables.
Nonetheless, she regards these mistakes not as a “blunder” but as “minor faults commonly made by other croupiers too.” She had received three warning letters, with the first one given to her in November 2020.
Cloee Chao, the president of the association pointed out that the satellite casino also pressured some staff to resign simply on the grounds that they had taken over 45 days off, including sick leave and personal leave.
The association denounced this move as “outrageous,” as many casino operators in Macau have encouraged — or even forced — their staff to take unpaid leave as a cost-cutting measure to weather the sluggish economy during the pandemic.
“If [the satellite casino] exploited a leave of absence of over 45 days as a rationale to lay off employees, well, all casino staff at the casino should be dismissed too,” Chao argued.
The cutoff date for the satellite casino will be at the end of this month after which time, the affected staff will receive a dismissal letter within seven days if they refuse to resign, said Chao.
The affected employees do not want to disclose the name of their employer as they believe they would be let go immediately without any room for negotiation, stressed Chao.
Chao told the Times, after delivering the letter to the DSAL, that the dislodgement decision was made solely by the satellite casino and has nothing to with its parent company.
DSAL authorities will reach out to the concessionaire to discuss possible solutions as the employment contracts of the affected staff are legally bound to the conglomerate, she added.
Almost all concerned staff are relatively new to the company, and have been employed at the satellite casino for no more than three years.
The complainant strongly believes that the dismissal is not due to the company’s financial issues as the satellite casino has fared well in terms of revenue. “Our gaming tables have always been fully occupied,” she added.
Chao also echoes the complainant’s standpoint, saying the dismissal may due to “some human resource errors.”
The complainant said that the job is crucial to her as she still has a mortgage to pay off and was injured in her right arm, leg and spine due to a previous car accident.