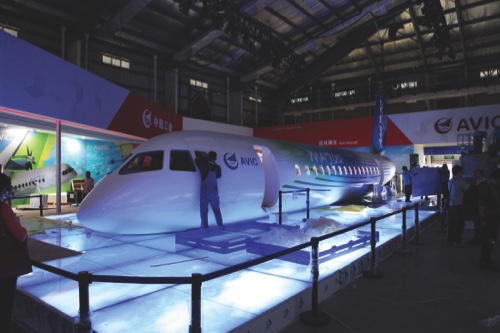 More than 700 businesses and 130 aircraft from 41 countries and regions took part in the 10th China International Aviation and Aerospace Exhibition, which officially opened yesterday and runs until November 16 in Zhuhai.
The airshow showcases different types of military and civil aircraft and other aviation equipment and services. A series of flight performances, seminars, press conferences and signing ceremonies have also been scheduled throughout the six-day event.
The Times spoke to several exhibitors about the aviation market in China and the effect of the economic slowdown upon the world’s second largest economy. All of them believe that the slowdown is not going to have a significant impact on the Chinese aviation market.
Mr Michael Han, regional vice president of sales in Greater China for the Canadian aerospace and transportation company Bombardier Business Aircraft, said that although growth of the Chinese economy is moderating, annual growth of seven percentage points is still impressive compared to mature markets such as the United States and Europe. “We have faith in the Chinese leadership to maintain economic growth. So, seven percent will be a sustainable and stable growth rate and this sets the foundation for the China business aviation and business jet market,” he said.
Bombardier is one of the major manufacturers of business jets. There are currently six Bombardier jets in service in Macau, most of them owned by private individuals. When it comes to the impact of China’s austerity measures on the country’s business jet market, Mr Han argued that they should be considered as business tools instead of luxury products.
“Business jets should not be promoted as a luxurious product. In the mature markets, it has always been considered as a business tool, a business tool that can help executives and families to improve their travel efficiency by providing the flexibility to schedule trips, as well as to offer comfort and privacy,” he said.
Mr Han added that Bombardier has a very strong forecast of 950 business jets to be delivered into China, which also include Macau, between 2014 and 2023 by all jet manufacturers. “Out of those 950 jets, a majority of the aircraft will be the middle sized or the large category private jets. The total value of these 950 aircraft is USD30.9 billion,” he said.
Meanwhile, in a press conference yesterday, the president of Airbus China, Eric Chen, acknowledged that the Chinese economic slowdown has impacted the development of the civil aviation industry. However, just like Mr Han, Mr Chen believes that a growth rate of six or seven percent is still impressive.
Airbus predicts that the annual passenger flow in China will reach 700 million in 2020 before it hits 1.3 billion in 2030. He also believes that there is a huge potential in the Chinese market. “I can feel very clearly that by 2020, the current fleet [in China] is going to be doubled to reach… about 4,000 airplanes in total… So there is no reason not to be optimistic about the prospectives,” he said.
The president then suggested that the key is to address the critical issues in the Chinese aviation environment including congestion, the shortage of pilots and infrastructure improvement. “If we have sound solutions to these critical issues, then the growth will be sustainable, healthy and continued to be in the right track,” he said.
Furthermore, the Commercial Aircraft Corporation of China (COMAC) has released the fifth COMAC Market Forecast Report during the airshow. It indicated that over the next 20 years, the Chinese market will need 5,541 trunk and regional jets. The revenue passenger kilometres will also increase at an average annual rate of 6.8 pct in China in the coming two decades, which is higher than the global average of 4.8 pct.
The size of the Chinese passenger fleet will also expand rapidly, with its share in the global market rising from the current 11 pct to 17 pct in year 2033, reaching 6,827. As for the number of new aircraft delivered, the report predicts that 5,541 new aircraft will be delivered in the Chinese market in the next 20 years, valued at USD674 billion, with single-aisle jets account for nearly two thirds of the total. It also suggested that the emerging market, represented by the BRICS (Brazil, Russia, India, China, South Africa), as well as the global low-cost airlines, will be the major propellers for the growth of single-aisle jets.

Airshow serves as a platform for exhibitors

Airbus China president Eric Chen said that they highly valued their presence at the airshow, which provided them with the opportunity to better understand the market. This is the 10th time Airbus China joined the air show. He believes that the event is also a platform for communication and contact, and to showcase their products. On the other hand, Evan McCorry, the vice president of international sales and marketing from Canadian aircraft manufacturer Viking Air said that the main purpose of participating in the airshow is to create awareness of their aircraft and to show that they believe in the future of China. João Pedro Lau, Zhuhai