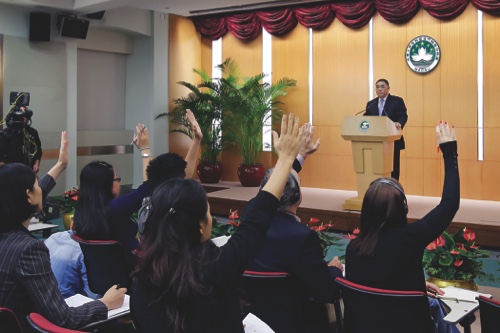 “The decline was expected and the global economic outlook could play a role in gaming revenue drops”, Chui Sai On.

Macau’s civil servants will benefit from a 6.8 percent salary rise in January, the Chief Executive has revealed. Attending yesterday’s Legislative Assembly plenary meeting to introduce budget policies for next year, Chui Sai On said that the pay for civil servants is set to increase from MOP74 to MOP79.
Upon hearing the Civil Servants’ Salary Assessment Commission, which has proposed a raise in civil servants’ income, the government decided to introduce a new pay scale of MOP79, and will soon be tabling a bill to the Legislative Assembly. The suggested wage increase surpasses the latest inflation figures set at around 6 percent.
In a press conference held after yesterday’s AL plenary session, Chui said that he would like to see the private sector applying a wage increase that can help residents deal with the inflation rate, too.
Lawmaker and president of the Macau Civil Servants Association (ATFPM), José Pereira Coutinho, welcomed the wage increase, although stressing he was not surprised. “We had already requested a salary increase for civil servants, taking into account inflation, the increase on essential goods’ prices, and estimations for the coming months,” he told reporters, adding that they had asked for the pay scale to be set at MOP80.
“It doesn’t surprise us that they adjusted the salary. But we will be asking for a gradual wage increase, so that employees with lower incomes are granted a higher wage,” he revealed.
The CE also confirmed yesterday that the cash handout policy will remain unchanged in 2015. Permanent residents will be granted MOP9,000, while temporary residents will be awarded MOP5,400 – the same amount they received this year. A MOP7,000 subsidy for elderly residents is also set to continue being granted in 2015.
The Chief Executive told a press conference that he hopes Macau residents understand why the government is not increasing the cash handout, as has happened in previous years. He recalled that the government has launched a series of measures to share revenues from the gaming industry with residents.
Asked to comment on a fifth consecutive drop in gaming revenue this month, Chui Sai On said that Macau’s gaming industry saw a long-term exponential growth and now it’s time for a re-adjustment. “The decline was expected and the global economic outlook could play a role in gaming revenue drops,” he said.
The Chief Executive stressed that there are two other strong elements boosting Macau’s economy, namely the non-gaming segment and tourist arrivals, which have been on the rise.
He said that while discussing a revision of current gaming concession contracts next year, the government will be advocating for a balance between gaming and non-gaming sectors.
Chui Sai On said that the government has been cautious in preparing the budget for next year, which is likely to be set at over MOP150 billion.
A policy launched last year reimbursing 60 percent of the income tax paid by residents will also be maintained next year. Tax referring to 2013 will be reimbursed in 2015, while tax paid in 2014 will be reimbursed in 2016.
Due to measures for the exemption and reduction of duties and taxes, the authority will no longer receive tax revenues worth over MOP2.135 million.
Asked about opinions that have reached his campaign office in August, and whose results were released early this week, Chui said he understands that traffic, housing and healthcare are among Macau’s citizens’ greatest concerns. He stressed that these are the three main areas in which the government is focusing on.
During yesterday’s Legislative Assembly plenary meeting, the Chief Executive reviewed the government’s performance so far this year. He stressed that Macau’s administration has provided long-term and efficient mechanisms addressing social security matters, as well as ensuring a long-term plan for housing.
The CE declared that the authority is committed to supporting local small and medium-sized enterprises and that adequate training opportunities have been provided to residents. Yet again, Macau’s leader insisted that the current policy allowing only residents to take up positions as casino dealers remains.
Giving priority to public transportation was one of the measures adopted, but the Chief Executive acknowledged that there is a gap between the new public transportation scheme and citizens’ expectations. He gave assurances that they’ve sped up the construction of the LRT system and taken measures to improve public bus services, too.

The Chief Executive has promised to maintain an open policy, listening to all citizens’ opinions, even when they’re divergent. “Macau, as a place under rule of law, and a place promoting democracy… we will always listen to the population’s [opinions],” he said.
Chui Sai On stressed that there is a need to develop democracy in a gradual manner. “But we cannot take any actions that go against current rules,” he added.
He understands that within a society, people hold different expectations and views. “We have been organizing the AL elections and CE elections. There are people who criticize, but that’s normal. We have to respect citizen’s opinions and we’re always open to hearing different political views or criticism,” he assured.
Chui concluded by saying that any electoral reform is always in the central government’s hands.