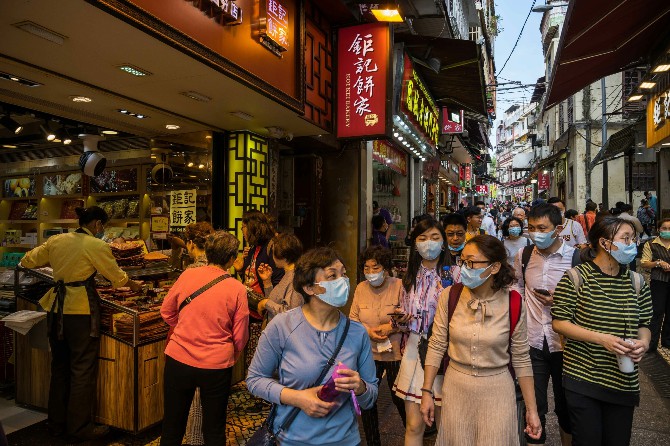 Macau tourist arrivals in 2020 plummeted to 5.92 million, a far cry from the visitor numbers in 2019, representing an 85% year-on-year decline.
Last year, the city reached the officials’ expectations of accommodating nearly 40 million tourists as Macau recorded some 39.4 million tourist arrivals.
Data from the Public Security Force showed how dramatically the region was affected by the Covid-19 pandemic, which has caused a global tourism standstill.
According to the statement, the “rapid decline” kicked off from the end of last January as the outbreak was already spreading in mainland China – the SAR’s number one source market.
During the last week of January 2020, the central government halted the issuance of tourist visas for its residents to visit Macau and Hong Kong.
The move has sternly affected the region as only Chinese tourists with Individual Visa Scheme (IVS) were allowed to enter. These IVS holders had acquired their permits to enter the region prior to the government issued halt on January 29, 2020.
Following the travel ban in January, visitor arrivals plunged 95% in February, the same month that Macau casinos faced an unprecedented 15-day shutdown amid the outbreak of the virus.
Although the mainland continued to be Macau’s primary visitor source market in February, the share of visitors from the mainland dropped to 46% of the total.
The flow of inbound and outbound tourists only visibly rebounded on August 12, when residents of Zhuhai were again allowed to apply for travel permits for Macau.
The move was seen as the first stage of a gradual reopening of the tourism trade between Macau and the Mainland, after months of near-zero levels of visitation.
The Macao Government Tourism Office (MGTO) has anticipated a decline of over 90% in tourist arrivals for the whole of 2020, as previous data showed that the region has only welcomed 4.60 million visitors between January and October 2020. The majority of visitors arrived in January, before Macau tightened entry restrictions.
Authorities were hopeful that visitor numbers would slightly rebound during the Golden Week – one of the city’s busiest weeks in terms of tourist traffic.
Indeed, Macau slightly picked up pace as it welcomed 156,000 visitors during the National Day Holiday, which took place between October 1 to 8.
Although the figure represented an 86% decrease year-on-year, the recorded data still signaled a post-pandemic rebound.
Since the resumption of travel endorsement in Guangdong on August 26, there have been an average of 15,000 visitor arrivals each day. During the pandemic, there were as few as 200 arrivals per day. As there is still a long way to go for tourism to get back to normal, the MGTO is still working towards package tour resumptions with tourism authority in mainland China.
However, due to travel warnings imposed by its counterpart, the local tourism bureau has adjusted its predictions for upcoming tourist traffic for the Lunar New Year holiday.
The approaching Chinese holiday is another season in which the city generally expects an increased flow of tourist arrivals.