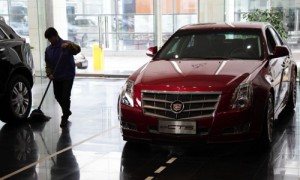 China’s auto sales growth decelerated further in August to 8.5 percent while sales of SUVs surged by nearly a third.
Drivers in the world’s biggest auto market by vehicle sales bought 1.5 million passenger cars in August, the China Association of Automobile Manufacturers said yesterday. Total sales, including trucks and buses, rose 4 percent to 1.7 million vehicles.
Global automakers are looking to China to drive global sales but growth has slowed steadily as the world’s No. 2 economy cooled from double digit rates of expansion. Auto sales growth declined from 13.9 percent in May to June’s 11.5 percent and to 9.7 percent in July.
The market share of Chinese auto brands eroded further in August under intense pressure from U.S., European and Asian brands that are spending heavily to appeal to local tastes.
Sales of Chinese-brand passenger vehicles grew by 5.7 percent while those for German, Japanese and American brands increased by 21.6 percent, 15.1 percent and 13 percent respectively. Chinese brands’ share of the market declined by 1 percentage point to 37.1 percent.
The standout vehicle category was sport utility vehicles. Sales rose 30 percent to 311,000 vehicles. That compared with 35.3 percent growth for the first seven months of the year.
Earlier, General Motors Co. said sales of GM brand vehicles by the company and its local partners rose 14 percent to 280,178 vehicles. The company said it was a new August record and the third-best month this year. For the first eight months of the year, sales rose 11.1 percent to 2.3 million vehicles. Joe McDonald, Business Writer, Beijing, AP