70th anniversary | Xi pays respect to Mao ahead of celebrations 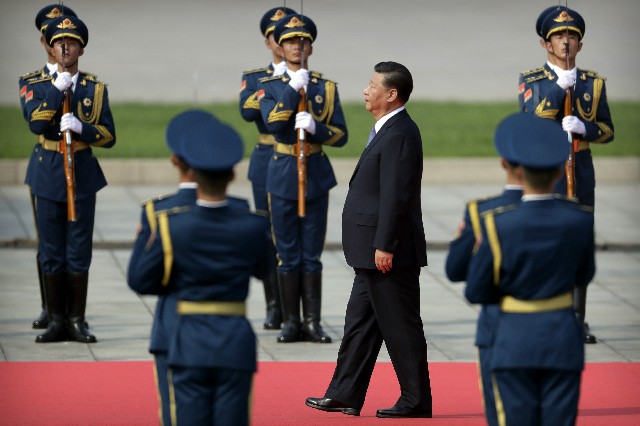 Chinese Communist Party leader and President Xi Jinping led other top officials yesterday in paying respects to the founder of the Communist state, Mao Zedong, ahead of a massive celebration of the People’s Republic’s 70th anniversary that will emphasize its rise to global prominence.
The unusual move saw Xi bow three times to Mao’s statue at his mausoleum in the center of Beijing’s Tiananmen Square and pay his respects to Mao’s embalmed corpse, which has lain in state in the hulking chamber since soon after his death in 1976. It was believed to be the first visit to the mausoleum by Xi and other officials since 2013, the 120th anniversary of Mao’s birth.
Xi also ascended the nearby Monument to the People’s Heroes to pay further tribute on what has been designated Martyr’s Day, just ahead of today’s National Day festivities, which will be marked by a massive military parade through the center of the city of 20 million people.
Along with other top party officials, more than 4,000 Chinese including elderly military veterans and retired senior officials, “relatives of martyrs, honorees of national medals and honorary titles,” and members of the party’s youth organization visited the monument to lay flowers and wreathes.
Sept. 30 was designated Martyr’s Day by China’s legislature in 2014, a year after Xi became president and began redoubling propaganda efforts to promote patriotism and glorify the party, as well as to cultivate a cult of personality surrounding himself unseen since the time of Mao.
The nationwide celebrations seek to highlight China’s enormous transformation from an impoverished state ravaged by Japan’s World War II invasion and a following civil war into the world’s second-largest economy. China now sits on the cutting edge of breakthrough technologies such as artificial intelligence and 5G communications and its growing military and diplomatic clout increasingly challenges U.S. leadership.
Xi is expected to preside from atop iconic Tiananmen Gate over a parade that will display China’s rapidly developing arsenal, possibly including the nuclear-capable Dongfeng 41 missile that could reach the United States in 30 minutes. Plans call for 15,000 troops, more than 160 aircraft and 580 pieces of military equipment to take part in the event.
The display of military prowess is seen as a way to underscore Beijing’s ambition to enforce claims to self-governing Taiwan, virtually the entire South China Sea and territory held by Japan.
The anniversary comes as China appears more stable than ever, 30 years after the party used its military to crush a pro-democracy movement centered on Tiananmen Square. Xi has revived theatrical expressions of love of party and state that were popular under Mao and has rallied the nation to his call for the attainment of a “Chinese Dream” of global prominence, all while cracking down ruthlessly on any sign of political dissent.
Xi faces no serious political rivals and has brought the party to heel through a wide-ranging anti-corruption drive. Last year, he cemented his role as China’s most powerful ruler of the modern era by amending the constitution to remove presidential term limits, sweeping away years of efforts to systematize leadership transitions and prevent the concentration of power in any one individual.
At the same time, Xi faces a slowing economy, aging population and an ongoing dispute over trade and technology with the U.S. that has restricted China’s access to American technology and hit its imports with tariffs. Beijing has responded with duties on American products, and the escalating trade war threatens the global economy.
Xi also faces persistent anti-government protests in the semi-autonomous region of Hong Kong, where demonstrators and police clashed for a second straight day on Sunday. That sparked further chaos in the city’s business and shopping belt and drew fears of more ugly scenes during the weeklong National Day holiday.
Protesters are planning to march again Today despite a police ban, posing a possible embarrassment to Xi.
The protracted unrest, approaching four months, has battered Hong Kong’s economy, with tourism plunging.
Many people view China as chipping away at the autonomy and freedoms Hong Kong was promised when the former British colony returned to Chinese rule in 1997.
Beijing has accused the U.S. and other foreign powers of fomenting the unrest in a bid to smear its reputation and weaken its control. Christopher Bodeen, Beijing, AP