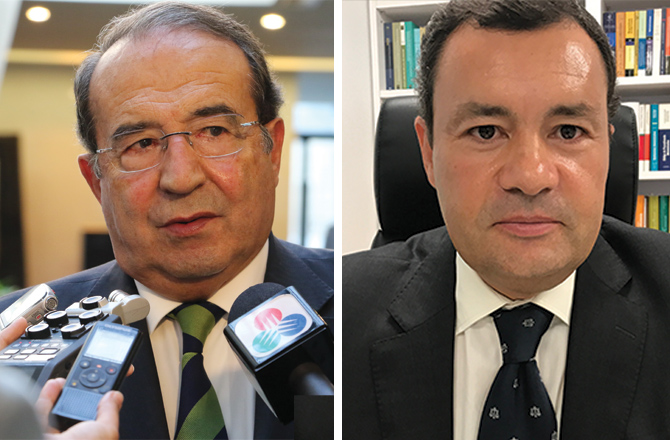 Comments from the president of the Macau Lawyers Association (AAM) Jorge Neto Valente when announcing that he will rerun for another mandate for the presidency of the association have caused shockwaves among the legal community.

Speaking to TDM, Valente announced he would be running in the elections, challenging the candidacy previously announced by lawyer Sérgio de Almeida Correia.

Almeida Correia announced at a press conference in mid-September that he decided to run for the top barrister’s post after Neto Valente asked for a “total renovation” of the AAM’s board and, in an interview to Radio Macau earlier this year, hinted that he would not be running again.

Valente reversed his previous stance on the matter by saying now that the reason leading to his decision to rerun is precisely the candidacy of Correia.

The incumbent president is said to have been approached by several lawyers, who allegedly requested his rerun against Correia, whom Valente has said to be “more known as political commentator and blog writer.”

Correia’s bid, he said, is one of “rupture and confrontation,” a fact that, according to Valente, his supporters think “not to be appropriate at this moment.”

“Dr Sergio Correia is not very well known among peers and does not have a significant legal practice, ” he added.

Valente also attacked Correia’s career as commentator, saying, “He is quite aggressive and ‘corrosive’ with the comments he makes towards the Chief Executive and the Legislative Assembly President. Looks like he is angry with everybody,” a reason that led Valente to say that his supporters fear that AAM will become a “political party or a union- like organization.”

The personal attacks on Correia were fiercely criticized by lawyer Jorge Menezes.

“The AAM election reached a new moral low by the personal attack conveyed by the current president on Sergio de Almeida Correia, on TDM, ” he told the Times yesterday.

“Attacking the quality or size of the legal practice of a colleague is ethically unacceptable and should not have happened. The merits of a lawyer are not measured by his or her richness, but by their inner qualities,” Menezes added.

“I hope that some of those in his team will come forward expressing that personal attacks and intolerance should not play a role in AAM,” he said. The lawyer noted that as he accused Correia in his comments, “Mr Valente has in the past publicly disrespected a legislator, judges and colleagues. This ethical failure must stop. Arrogance is a typical consequence of enjoying too much power for too long: power changes people.”

For Menezes, the harsh words of Valente could result from the fact that he has been running the association for too long a time, expressing wishes that the elections could serve, instead, the purpose of a wider discussion of the problems of the sector and ways to improve it.

“He has been the president for over 20 years. It seems that he wants to keep the job at any cost. This is not typical of democratic institutions,” Menezes said. “His incapacity to accept a challenge and to engage respectfully with those holding different views was an unnecessary show of weakness. The objective of these fierce personal attacks may be to make it difficult for Almeida Correia to find enough lawyers willing to be part of his team. There is a climate of fear among lawyers.”

In Menezes opinion, such attitudes can contribute to a democracy deficit and open discussion of topics of the interests of all professionals as “lawyers who would welcome a change are shying away from voicing their preferences out of fear of retaliation.”

For the barrister who recently helped reinstate Sulu Sou’s mandate as legislator, regardless of the final results of the elections and who wins it, “we are all already losing by this public show of intolerance.”

Contacted also by the Times, lawyer Miguel Senna Fernandes said that the fact that there are two candidates to lead the association is positive. “It is the first time that this [has] happened and [the fact that there is challenging competition] shows the vitality of the Association,” he said.

“It’s good that we can prove that is false, the idea that there is nobody else [besides the current group] that is willing and committed to lead the managing bodies of the association and proves that the presidency is disputed. I can only praise the fact that this is happening.”

Regarding the comments of Valente on Correia, Senna Fernandes said, “Obviously if we are talking about prestige, Dr Neto Valente is a lawyer with more prestige, at least because he has been the president of AAM, but this does not mean anything really, and specifically does not mean that the position is not disputed, ” he said. 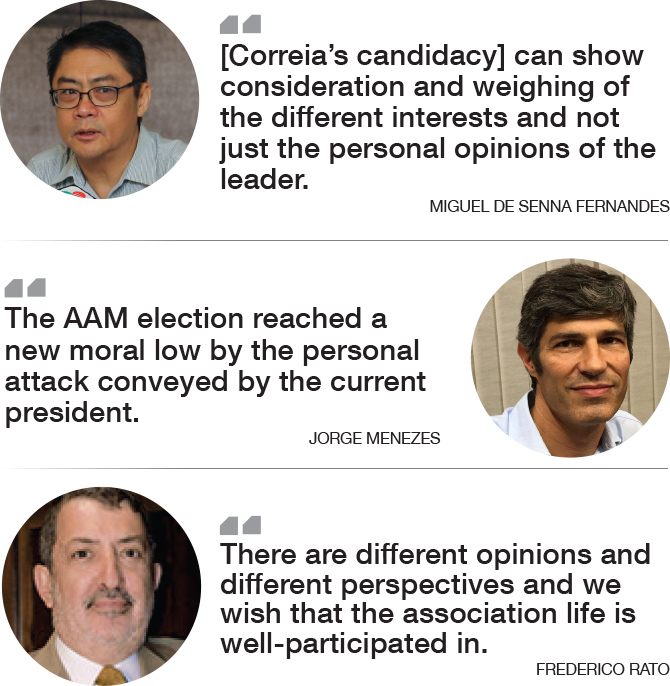 “I understand that different candidates will for sure express different opinions on how to conduct the association, and […] that creates a kind of rupture but, what is important is that we don’t have a total rupture.”

Senna Fernandes noted that it is also important to understand the “local culture and the fact that the majority of the population [including of the lawyers] is from Chinese ethnicity.”

Senna Fernandes, who is also a commentator, said he is very familiar with Correia’s ideas and positions regarding several important public affairs, and said that he hopes he will receive some consideration, and that Correia’s candidacy “can show consideration and weighing of the different interests and not just the personal opinions of the leader.”

Of a similar opinion is lawyer Frederico Rato, who said, “It’s a [positive thing] that there are different opinions and different perspectives and we wish that the association life is well-participated in.”

Rato noted also that it is very positive that all the members can “know the candidates, the programs, opinions and finally can choose in conscience what they think is the best.”

The veteran lawyer, who heads the Advocacy Council, said that, despite of everything else, what he wishes is that “the perspective, ideas and platforms can be known by the members.”

The fact that there are, for the first time, two candidates is “a sign of the diversity of opinions that exist inside the association,” Rato concluded.