Academic freedom | For many in Macau, the discussion has turned to ‘how much?’ 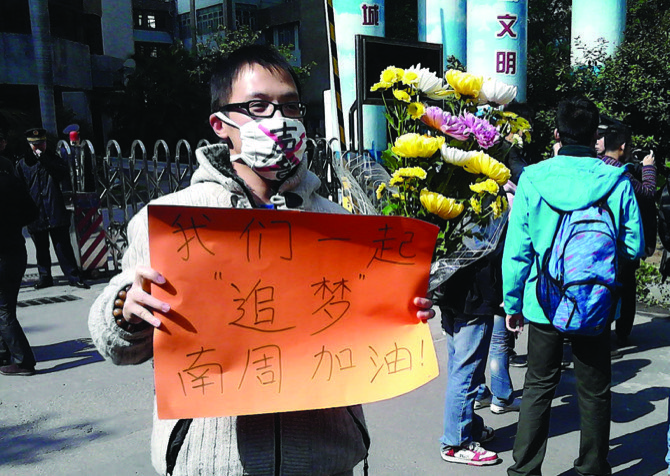 A man wearing a mask with the word “Silent” holds a banner reading: “Let’s chase our dreams together, go Southern Weekly newspaper” during a protest outside the headquarters of the newspaper in Guangzhou. A dispute over censorship at the Chinese newspaper known for edgy reporting has prompted a few hundred people to gather in a rare street protest urging Communist Party leaders to allow greater political freedom

For many in Macau, academic freedom appears to be less a question of ‘present or not’, but rather ‘how much?’

Some scholars argue that academic censorship in the SAR is low, given the freedom that institutions and scholars have to publish their research when compared to their peers in China. On the mainland, academics continue to fight, expose and criticize systemic injustices against academic freedom.

However, others are concerned that censorship is on the rise, and the tolerance for dissent is waning.

Examining how Macau is influenced by China’s academic repression is pertinent at a time when state-led ideological indoctrination of academia and the media is on the rise.

Back in 2014, three professors based in Macau who voiced their political views were sacked, suspended or demoted, which many saw as evidence that unprecedented censorship was seeping into Macau’s universities.

The contract of political science professor Bill Chou at the University of Macau was reportedly not renewed in that year “in retaliation for his political activism,” according to Scholars at Risk Network. The UM said at the time it was pursuing disciplinary action against the professor for allegedly imposing his political views on students, while Chou claimed his academic freedom was not being respected.

Only a few months ago in the neighboring city of Hong Kong, a group of 29 alumni from Hong Kong University (KHU) delivered a petition demanding that the education institution launch a disciplinary inquiry against academic and Occupy Central co-founder Benny Tai for advocating civil disobedience “in the disguise of an academic.”

The petition, which counted among its signatories Hong Kong lawmaker Junius Ho and several local National People’s Congress deputies, falsely claimed that he had not published any academic articles since 2013.

It’s a story that continues to play out further abroad, with self-censorship and pressure exerted on foreign institutions in search of funding or joint ventures on the mainland.

In an interview with TDM Radio earlier this month, the director of the Confucius Institute in Lisbon, Teresa Cid, refuted the idea that the Institute, like others worldwide, is at the service of the Chinese regime’s propaganda.

“Any institution [from any nationality] that teaches a language and culture of any country is [by definition] a space for dissemination of that language and culture,” she said, adding that some people might consider this propaganda, a label that she refuses to accept.

In a separate case, students from Taiwan recently criticized exchange programs to mainland China and Macau for being mere propaganda aimed at reinforcing thoughts of unification between China and Taiwan.

For example, during their visit to Macau, some students were taken to an exhibition featuring the “successful implementation of the ‘one country, two systems’ framework.”

According to Chen Ku-hsiung, president of Taiwan’s National Cheng Kung University, who participated in the exchange program, the students were repeatedly told about the advantages of the framework, as well as informed that Beijing would eliminate Taiwan separatists.

The Times contacted scholars to enquire about academic censorship and freedom in Macau. Unsurprisingly, many declined to comment.

According to an associate professor and assistant dean at the City University of Macau’s Institute for Research on Portuguese Speaking Countries, Francisco Leandro, there are limitations on academic freedom – as with any other right.

Speaking to the Times, Leandro said that the so-called academic censorship has been used as a sort of “narrative,” operating as a basket of interests, most of the time with harmful political purposes.

“The academic censorship narrative makes an implicit assumption that scholars should have absolute freedom to design their syllabi,” he said, adding that such limitations are aimed at ensuring the protection of other legal goods with similar value and societal importance.

“Nowhere does such absolute right of academic freedom exist,” Leandro added. “[There must be a] balance of public and private interests in a modern society.”

Leandro further explained that academic freedom must safeguard against biased perspectives based on hidden conflicts of interest and other matters.

“Unlimited academic freedom is a dangerous disease that harms the true nature of a scholar’s fundamental professional values,” said the academic.

“Therefore, the exercise of academic freedom should be implemented in the context of peer review mechanisms, established and participated administrative guidelines, plurality of teaching methods and inclusive participation of all involved in the processes of administrating, teaching and learning,” he added.

Some academics in Macau with an educational or research interest in scientific fields said that academic censorship is low in the SAR.

“I don’t feel that there is academic censorship in Macau. I’ve never felt limited in what I can study or write about,” said one scholar, who asked to remain anonymous.

“In my field, I actually do not feel that censorship. I have not experienced any restrictions in doing science here. We have ethical guidelines for doing research and publications but this is the standard all over the world,” said another.

However, political scientist Eric Sautedé said things have worsened in recent years. The scholar questioned whether researchers are still working on contentious issues and how many of them are being able to receive grants to study controversial matters.

In Macau, public entities such as the Science and Technology Development Fund, the Macao Foundation and the Cultural Affairs Bureau, among others, fund academic research projects.

Sautedé believes that the Macao Foundation is unfit for the job and that it should be a priority of the government to reform how research is financed in social sciences. He believes that research should be independently funded.

“Things have become extremely constrained in the academic world in China today, but I truly believe that it was Macau’s own doing, a sort of pre-emptive censorship to stay in control and presumably please a distant master,” remarked Sautedé.

“But the main drive was just to keep things blurry in Macau so as not to reveal the level of inadequacy of most of the public policies designed here,” he said. “Academic censorship is mainly Macau-made.”

“Anything that could lead to greater transparency and a bit of accountability is totally forbidden, simply because the people who run the show know too well that they can only thrive in blindness and opacity.”

Questioned on whether there is an increase in the number of scholars that no longer dare to engage in critical research, the scholar remarked, “just like the decline of biodiversity, independent-minded scholars are becoming rarer by the day in Macau, especially the ones dealing with politics, society and public administration.” Lynzy Valles