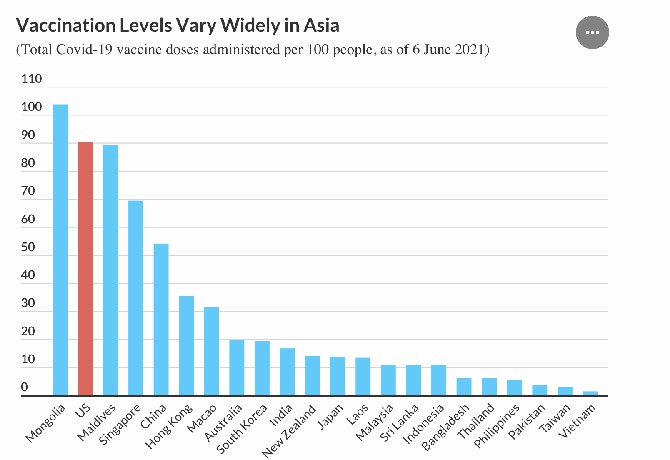 The recent spikes in vaccination rates in some Asian economies have become a strong shield, helping these regions guard against setbacks arising from further resurgences of the Covid-19 pandemic, according to the global credit rating agency Fitch Ratings.
In an analytical report published by the agency on June 8, China, South Korea, Japan, and Australia have demonstrated the most pronounced rise when it comes to vaccination rate over the past month.
China has shown a remarkably rapid increase in inoculation, registering 1.38 doses administered per 100 people on June 6; representing a 0.94 dose surge from 0.44 on the same day of the preceding month.
Among all countries surveyed by Fitch, China displayed the fastest monthly advancement in vaccination.
Within China, the Macau SAR region registered a record of 0.74 doses administered per 100 people on June 6, with a 0.51 increase in doses month-to-month. Macau outperformed many other Asian economies including its counterpart Hong Kong, which had only a 0.05 doses increase month-over-month.
The swift increase in inoculation over the past month among Macau residents portends that the city is more likely to “reduce the risk of setbacks to economic recoveries and public finances associated with further waves of the Covid-19 pandemic.”
In North Asia, Japan is an outstanding performer, reaching 0.55 doses per 100 people on June 6, with a monthly uptick of 0.47 doses. It was closely followed by an increment of 0.44 doses in South Korea.
Despite the noticeable surges in Asia, Fitch stressed that the vaccination rates in most Asian countries “remain very low,” which makes them prone to “pandemic setback risks.”
This relationship was demonstrated by fresh waves of outbreak in India, Japan, China’s Guangdong province and the Australian state of Victoria – which saw tightened restrictions implemented on the heel of the resurgence in these regions.
In Fitch’s comparison, Mongolia was ranked as the most vaccinated economy in Asia, registering an aggregate of 103.64 doses administered per 100 people as of June 6. Maldives (89.29 doses) secured second place, followed by Singapore (69.19 doses), China (54.04 doses), Hong Kong (35.18 doses), and Macau (31.19 doses).
However, Fitch warned that pandemic setback risks may persist even with relatively high rates of vaccination, considering uncertainties about the efficacy against future new strains of Covid-19.
“Nonetheless, we anticipate jurisdictions with higher levels of vaccination will be better positioned for near-term recoveries than those where vaccination rates remain low,” it stated.
According to the government’s latest statistics, there were 223,082 administered in Macau by far. A total of 149,506 people were inoculated. Among them, 74,684 were fully vaccinated and 74,822 had taken their first jabs.