Africa | Ebola starting to take an economic toll in region 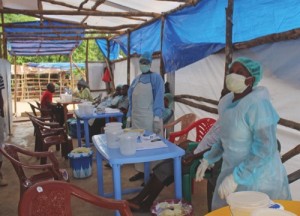 Caterpillar has evacuated a handful of employees from Liberia. Canadian Overseas Petroleum Ltd. has suspended a drilling project. British Airways has canceled flights to the region. ExxonMobil and Chevron are waiting to see whether health officials can contain the danger.
The Ebola outbreak, which has claimed nearly 1,000 lives, is disrupting business and inflicting economic damage in the three African countries at the center of the crisis: Guinea, Sierra Leone and Liberia. So far, analysts say the crisis doesn’t threaten the broader African or global economies.
“We must make sure it is controlled and contained as quickly as possible,” said Olusegun Aganga, trade minister in Nigeria, which has confirmed nine cases of Ebola. “Once that is done, I don’t think it will have a lasting impact on the economy.”
The World Health Organization on Friday declared the outbreak an international public health emergency. The WHO didn’t recommend any travel or trade bans. But it cautioned anyone who had had close contact with Ebola patients to avoid international travel and urged exit screenings at international airports and border crossings.
“When you have a widespread outbreak of Ebola, you can end up with a panic,” said John Campbell, senior fellow for Africa studies at the Council on Foreign Relations. “People won’t go to work. Expatriates will leave. Economic activity will slow. Fields won’t get planted.”
The World Bank estimates that the outbreak will shrink economic growth in Guinea, where the crisis emerged in March, from 4.5 percent to 3.5 percent this year.
Ama Egyaba Baidu-Forson, an economist at IHS Global Insight who focuses on sub-Saharan Africa, is cutting her forecasts for growth this year in Liberia and Sierra Leone. She warned that prices would rise as food and other staples become scarce and that the region’s already fragile governments would run up big budget deficits in fighting Ebola.
Baidu-Forson says the countries hit by Ebola ultimately could require financial help from the International Monetary Fund.
In the meantime, multinational companies that do business in the resource-rich region are scrambling to respond to the crisis. Among them:
— Heavy equipment manufacturer Caterpillar Inc., based in Peoria, Illinois, has “evacuated less than 10 people” from Liberia, company spokeswoman Barbara Cox said by email. In a statement, Caterpillar said: “The health and safety of our people is our top priority. We will continue to monitor the situation closely.”…
— British Airways has announced that it’s suspending flights to and from Liberia and Sierra Leone through Aug. 31 “due to the deteriorating public health situation in both countries.”
— Tawana Resources, an Australian iron-ore company, said it had suspended “all non-essential field activities within Liberia” and sent all non-essential African workers, expatriates and contractors home.
— London-based mining company African Minerals has begun imposing health checks and travel restrictions on employees in the region.
— Canadian Overseas Petroleum, based in Calgary, has stopped drilling in Liberia. And some of its expatriate employees have left the country.
— ExxonMobil said in a statement that its offices remain open and that “we’re taking precautions to ensure the health and safety of our employees.” The company has offices in Liberia, Nigeria and several other African nations.
— Chevron, which has an office in the Liberian capital of Monrovia and is in the process of exploring for oil off Liberia’s coast, said it’s “closely monitoring the outbreak of Ebola virus in West Africa.” But the company wouldn’t say whether it was withdrawing any employees or taking any other steps as a result of the outbreak.
So far, the economic damage has not affected West Africa’s biggest economy, Nigeria’s, though the disease has already spread to that country.
“It’s not stopped commerce; it’s not stopped buying,” said Danladi Verheijen, managing director of the investment firm Verod Capital. “The flights are still full going into Nigeria.”
Timi Austen-Peters, chairman of the Nigerian engineering and manufacturing firm Dorman Long, met in Washington on Friday with investors who were interested in Africa. Ebola, he says, didn’t come up in the discussion.
“We were having a good old-fashioned business meeting,” he says. “They were not in any way spooked.” Paul Wiseman, Washington, AP