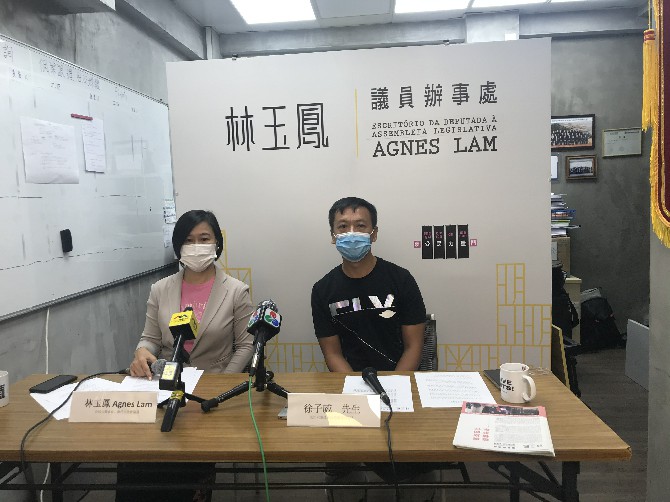 Lawmaker Agnes Lam has expressed her strong disapproval over what she sees as the government’s lack of accountability for a recent accident in which a civilian was injured on account of the poor construction of a public facility.
Earlier this week, Macau resident Choi Chi Wai sustained a bone fracture when he was hit by a falling washbasin and construction debris at the Hac Sa Reservoir. Choi, a heavy-duty vehicle driver, has been told by his doctor to take a three-month-long break in order to recover from the injury.
After the accident, instead taking responsibility for the facilities under its management, the government denied any accountability. Despite being the manager of the facility, the IAM blamed the constructor who built the facility, even though the bureau had accepted the completed project.
Yesterday, Lam and Choi held a press conference to announce their intent to pursue accountability from the government.
“I am not satisfied by the IAM’s response. The IAM only says it will investigate the constructor, but not its own responsibility. This is unacceptable,” said Choi, who announced that he will pursue compensation from the government.
According to Lam, the stone used in the washstand had not been installed properly. “The contractor in question seemed to have low-quality skills, or even cut corners while installing the washstand,” said Lam.
The lawmaker believes that the facility should be checked and fixed and an investigation report submitted. If the cause of the incident was negligence or low-quality construction, the contractor should also be held accountable for the incident, according to Lam.
The lawmaker urged the government to specifically explain measures of improvement after completing the investigation. She also demanded IAM release a detailed investigation report about inspection tests and maintenance of public works to the people.
In addition, Lam proposed that the government review its tender method. According to Lam, information has shown that the contractor of this public toilet was awarded through selective tendering. Different from open tendering, selective tendering is done by the government, which invites several designated contractors to tender before final approval.
Government authorities normally include the qualifications of contractors and the quality of materials used in the public works as standards in open tendering. However, the standards of selective tendering are not released.
“It is clear that the authorities tend to consider the estimated costs, duration of the construction and the proportion of local construction workers involved, instead of the qualification of contractors or the quality of the material used. As a result, contractors providing the lowest bids are usually awarded the projects,” said Lam.
Considering the fact that most optimization projects of public bathrooms in recent years were adopted by selective tendering methods, and given that a tender process that may not include quality of the work as a standard, “the IAM should take the main responsibility for checking the quality when inviting contractors.”
“This incident further reflects that the company may not meet the standard in quality, even though it was awarded the contract,” said Lam.