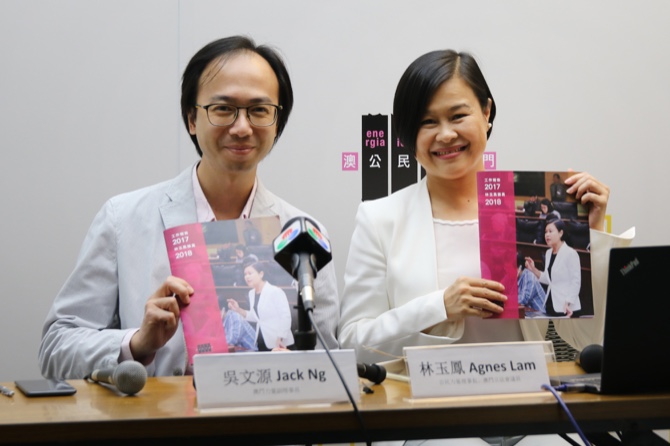 Agnes Lam yesterday made an evaluation of her first- year as a lawmaker at the Legislative Assembly (AL) and of the work developed by the group she represents – Macao Civic Power – in support of her lawmaker duties.

Not wanting to “grade her work” on a 100-point scale, the lawmaker said, “Better you grade me, as a student, I do not grade myself. I rather the ‘teachers’ tell me what they think about [my work],” she said. “We are trying our best to communicate with our voters and the general public and citizens. I want to listen to the people, and, actually, we have listened to some already and they have already told us they want us to do [more].”

Remarking on the areas that Lam thinks she can improve upon or do more in the upcoming legislative year, the lawmaker said she would focus more upon the ‘systematic issues’ in Macau,” explaining that sometimes there are cases brought individually by one citizen and that they have been handled each as isolated cases, but afterwards, “from time to time we realize that we are receiving repeated cases [which reveals] there is a systematic problem [and not an isolated one].”

To tackle those issues, the lawmaker said a different approach will be taken. “Whenever we have a case [we] should look at it and try to figure out if it is a ‘systematic issue’ or an ‘isolated case’ to see if we should launch an investigation or start a dialogue with the government.”

Another topic, which Lam proposes to improve this year, is concerned with law proposals. “In the first year I tried to understand the system and how effective my suggestions would be. But I think in order to make my suggestions more effective we need to push them and submit [proposals or reviews] even to the government. We are not doing that yet, so I think we should include this [this year].”

During the press conference held at Lam’s Office, the lawmaker also said she had noticed that during the past year she had addressed mostly topics on infrastructure and city planning, which she supported with the fact that the year’s AL session had been marked from the start by the effects and the aftermath of Typhoon Hato and its consequences to the city, and the highlighting of existing flaws at several levels.

Still, she considered that her efforts in that field were “successful in calling people’s attention [to these problems],” adding, “I think the government took many of my suggestions seriously,” specifically in regards to alerts to populations in low-lying areas of the city to evacuate in an emergency.

“I cannot say I invented all those things, but I was one of those pushing [them] onto the agenda,” she concluded.

Another topic in which Lam believes her suggestions were well received was regarding the restructuring of the former Civic and Municipal Affairs Bureau, specifically the recommendation program for the body’s members: “Now they have adopted it and doing it already, so this might be the case I can consider I was successful, but there are a lot of others in which I didn’t do well.”

From an annual report of her work as a lawmaker, Lam mentioned that she had received a total of 177 contacts from citizens involving around 1,000 people in total. Of those, the lawmaker said they have already processed 166 cases that were either forwarded to the government or that resulted in some kind of legal advice.

As the lawmaker mentioned, some of these cases also needed further investigation to be reported to the government as, she noted, “we realize sometimes it is one case coming from one person but which reveals a larger problem which we need to investigate to make a proper enquiry to the government.”

Topping the list of the cases handled by Lam’s office (24) are housing issues followed by transportation (23) and urban/city issues (22).

Such cases have resulted in submission to the AL of 46 written enquiries as well as five spoken enquiries and 18 topics addressed in the agenda.

During the legislative year of 2017/2018, Lam also submitted one debate proposal to the AL.

‘Final year of the CE should not change AL’s pace’

QUESTIONED ON the topic of the soon to start legislative year be the last of Chui Sai On as Chief Executive and her expectations for this final year, lawmaker Agnes Lam said, “I hope the work that we already have planned does not stop somewhere until the next Chief Executive and then we need to [re]design and discuss again and take another five years [to develop]. I don’t want this to happen.” Another of the aspects she noted is that because Chui comes, originally, from the social welfare sector and he is sensitive to such topics, “We noticed that this sector is one of those that developed more over the last 10 years with a lot of subsidies and started a lot more programs to help the minorities,” adding, “there is still one more [minority] group that needs help which is the parents of special needs students. These people need something urgently from the government because we cannot just call on the parents to sacrifice themselves [more] to train those students,” she added. Commenting on one of the new laws that the AL will start to address when it resumes this week, the so-called “Wiretapping law,” Lam said that what the AL must grant is that, “we must assure [that the law] does not interfere with the personal freedom and personal rights [of people].”