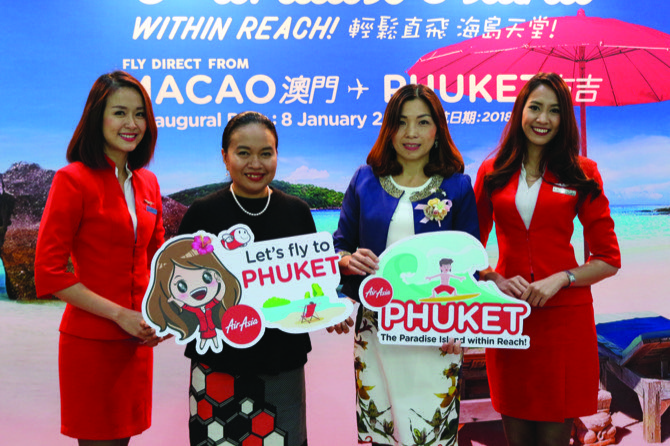 Speaking on the sidelines of the inauguration of the Macau-
Phuket route, which kicked off yesterday carrying 171 passengers from Macau, Lao noted that all flights will be short-haul.

She added that there is a possibility of using its Airbus A330, depending on the demand, yet declined to reveal which routes the airline is working on.

“All [new routes are] within four hours,” said Lao.

“It really depends on the economic situation of Macau and how we can connect to the Pearl River Delta and [establish] a close partnership.”

AirAsia group is the biggest non-Chinese airline operating in the territory as it operates a total of 72 weekly flights, and remains the second biggest operator in Macau.

The new Macau to Phuket route, which consists of daily direct flights, marked the airline’s fourth Thailand route and seventh international destination departing from the city.

Meanwhile, the CEO explained that the budget carrier has been trying to get slots to operate routes to Phuket airport for years, but was only granted a Macau-
Phuket slot last year, given the popularity of the destination.

According to the airline’s database, travelers’ demand for flights from Macau to Phuket is high enough that another daily flight could be added.

“We always try [to apply for slots]. Not only for Macau but for many other destinations,” said Lao adding that it is also dependent on cooperation with different airports and the availability of airport and flight slots.

In terms of passengers at the airport, the group has around 12 to 13 percent market share including full service and low-cost flights.

“The competition is here for sure. It is very keen because the more we realize that this market is growing, [the more] low-cost carriers [will come] to Macau,” the CEO shared.

“But it’s a good thing. More passengers will pay attention to Macau and more passengers from the Pearl River Delta and Hong Kong will come to Macau as well. This is synergy instead of competition at this moment,” Lao continued.

Also attending yesterday’s event, Sirima Chindamat, director of the Tourism Authority of Thailand, Hong Kong Office said that passengers flying from Macau to Phuket via Bangkok amounted to some 70,000.

The director shared that Macau and Hong Kong remains a potential market to Thailand, describing them as “quality tourists.”

“We would love to see 8 percent more at least, especially with Air
Asia’s new route, we are positive to get this number,” Chindamat told the Times.

The CEO of AirAsia Hong Kong and Macau also echoed that the chance of adding another Macau-Phuket route is higher than the addition of a Hong Kong-Phuket route, as Hong Kong airport’s runway is often maximally occupied.

Currently, Hong Kong operates five direct flights per day to Phuket, with AirAsia flying the route once a day.

Meanwhile the Civil Aviation Authority (CAM) said that it is expecting more airlines to operate in Macau.

“With the economic growth, generally the whole economy in Asia is going well, so I’m expecting more airlines will be more interested in operating in Macau,” said CAM’s president, Simon Chan.