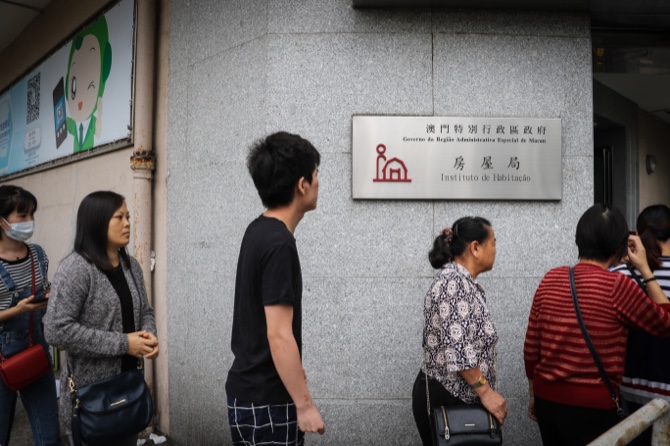 The ranking of candidates for affordable houses will be points-based once the Macau SAR government implements the new amendment to the affordable housing law, which was passed at the Legislative Assembly (AL) plenary meeting yesterday.

Currently, applicants are being divided into three different groups, with one of the three groups being given priority for balloting.

Once the new amendment comes into effect, no priority will be granted to any category. Therefore, the family that ranks first according to the points it receives will be considered the candidate most in need of affordable housing.

The details behind the points-
based methods will be announced after the Chief Executive approves the bill.

However, despite more than 80 percent of the public opinion preferring the points-based method, the ranking method still does not satisfy lawmaker Sulu Sou.

In Sou’s opinion, there should be a permanent waiting list mechanism, creating fairer conditions for individual applicants.

Both Sulu Sou and Au Kam San want the points-based evaluation mechanism details to be publicly displayed along with the affordable housing law, not just published as a Chief Executive dispatch.

Another controversial change requires applicants to be 25 years old or above and to have lived in Macau for a minimum of seven years.

“This is discrimination towards people aged between 18 and 24 years old. What is the basis?” Sou questioned.

“Comparing the medium salary with the housing price, we [young people] basically cannot even afford the down payment unless we are from a rich second generation,” said Sou, who also voiced that “the problem with affordable houses is related to private house projects being too expensive.”

According to data presented by Ho, in the past few years, only a single-digit number of applicants was aged between 18 and 24.

The age change was questioned by more lawmakers, including Angela Leong and Lei Cheng I.

The amendment states that all members of each application should have resided in Macau for at least 180 days every year. The new law will also provide exceptions to applicants who suddenly obtain possession of a residential property due to inheritance.

In order for public houses to be used reasonably, applicants are not allowed to own (except for the abovementioned exception) any residential property 10 years before the date of the affordable house application submission.

Ma Chi Seng supported the amendment, but suggested that the government should increase land supply and private housing supply. Other lawmakers, including Au Kam San, also emphasized the expensive nature of the private housing market in Macau.

In reply to the lawmakers’ comments, Secretary for Transport and Public Works, Raimundo do Rosário, said that the age change “is not discriminatory to anybody.”

“We are not discriminating against anybody. […] If the age requirement is 18 years old, the demand will be even bigger,” Rosário clarified.

“A permanent waiting list for affordable houses cannot be [established] in a short period. But the government indeed has the intention to do it,” said Rosário.

With regard to the points-based mechanism and in particular, the inclusion of detailed selection criteria, Rosário explained that “if it is a dispatch, it will give us more flexibility when [details] need to be changed.”

In addition, the Secretary commented that Macau’s affordable houses are better than the houses offered in the private sector.

“The affordable houses are not bad. Some people tried so hard to buy a house [from the private market], but they can’t see anything [e.g. a nice view]. We pay MOP1 million and we get a new, beautiful house with a nice view,” said Rosário.

On the lawmakers’ agenda

TRADE UNION LAW Sulu Sou has asked the government how long Macau is going to wait for the establishment of trade union law. Sou cited the recent lifeguards’ unfair employment case, saying, “Macau has always lacked a specific law which can give trade unions a legal position and ensure that employees will not be troubled for organizing trade unions, strikes, or engaging in negotiations. […] The government’s attitude so far has been [to] avoid its constitutional responsibility and has been suspected [of being] biased toward the employers,” said Sou.

HOLIDAY CHANGE Some lawmakers, including Lam Lon Wai, have expressed their opposition towards the labor law amendment proposal concerning the compulsory holiday change. As expressed earlier last week, lawmakers believe that selecting three holidays (out of four proposed compulsory ones) to become ordinary holidays violates the workers’ rights. “I strongly request the government cancel the amendment plan as well as the part-time job regime,” said Wai. Leong Sun Iok requested the “government give up the proposal, to ensure the employees’ rights, and to maintain the labor law’s principles.”

HKZMB Si Ka Lon, Ho Ion Sang and other lawmakers suggested that the Macau government improve the affiliated transportation facilities at the Macau port of the Hong Kong-Zhuhai-Macau Bridge. The lawmakers pointed out various issues, including traffic problems at Oriental Pearl, issues with the arrangements of buses 101X and 102X, the lack of restaurants and shops at the Macau port, the connection between the HKZMB Macau port and the new urban zone, and the transportation in the port’s vicinity. “By comparison with Zhuhai and Hong Kong ports, tourists will have a largely discounted impression about Macau,” said Ho. The lawmakers proposed that the government build an integrated shopping facility at the Macau port.