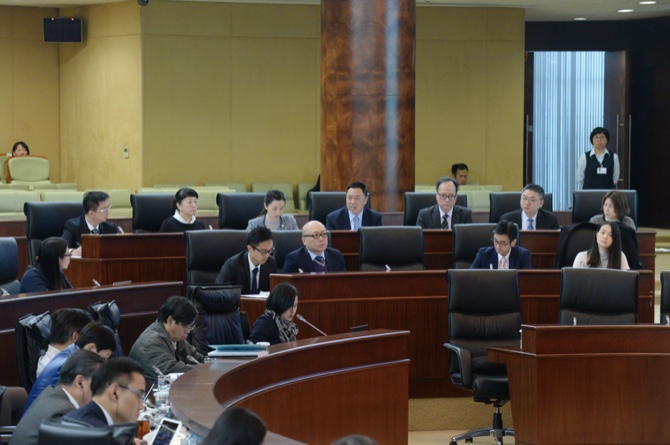 Secretary for Economy and Finance Lionel Leong (top, center) at the plenary session

The detailed articles regarding the banning of casino employees from entering casinos while off-duty were passed at the Legislative Assembly (AL) yesterday. In total, more than 14,000 employees of casinos will be regulated by this law once it comes into effect.

Previously, lawmakers were worried about creating a negative image of the gaming sector’s employees. The same concerns were expressed by lawmakers yesterday.

“I believe that, for a certain period, the law can have an effect at preventing employees from being trapped as gamblers. However, many people worry about the actual practice of the law,” said Angela Leong, adding “this bill has some practical difficulties in terms of its implementation.”

As she expressed, casino employees are only able to implement the law using simple observation when identifying whether or not a patron is a casino employee.

“Are there other effective measures? Will the government build a smart city, and enhance law enforcement through new technologies?” Leong asked.

“I have reiterated in the past that, when the entry regulation is implemented, the supervising party and the gaming operators [both] need to bear great responsibilities,” said Leong.

The lawmaker stressed that workers banned from entering will likely face emergency situations requiring them to enter a casino while off-duty.

José Pereira Coutinho also criticized the law for going against principles of equality. He further expressed concern for officers from the Gaming Inspection and Coordination Bureau (DICJ) and other supervising parties, related to heavy workloads as a result of pressure from the large number of people banned from entering the casinos.

“If there are not enough people to conduct the supervision, how can the authorities implement the law?” asked Coutinho.

In response to lawmakers, Secretary for Economy and Finance Lionel Leong claimed that the law would not tarnish the image of casino employees. “I have never wanted the law to create any discrimination against workers,” defended the Secretary.

According to Leong, the DICJ, together with gaming operators, will conduct an extensive promotional campaign in order to help workers learn about the implementation of the law. In addition, Leong noted that the entry ban will not affect the careers of any party concerned.

“I want to reiterate that this law was never intended to affect the careers of people who enter casinos,” said Leong, adding “we will not consider such things.”

Regarding whether new technologies might be applied to support law enforcement, Leong noted that the government will consider this when they become available.

Meanwhile, DICJ Director Paulo Martins Chan argued that the law will not influence the employment of the affected workers.

“[Many people] worry they might lose their job once they violate the law. This law simply sets up a penalty. Besides this [penalty], [the law] will not lead to workers losing their jobs,” said Chan.

The DICJ director also highlighted that the law will come into effect one year after its publication in the government official gazette, which means that a transition period of one year will be given to residents before the law’s official implementation.

The one-year grace period is meant to allow the parties concerned to get familiar with the law, and for the government authority to conduct seminars explaining the law to the public.

In addition, the DICJ director remarked that it is easier for a gaming employee to become addicted to gambling if they watch other people gamble.

After the law comes into effect, the government will establish a 24-hour hotline in the hope of implementing the law more effectively.

Chan also admitted that there is a shortage of human resources responsible for casino supervision.

“The law is absolutely established with the aim of responsible gaming. The law [is expected] to prevent people from becoming addicted to gambling,” said Chan. “I believe that the majority of gaming employees will obey the law. In this bill, it is written that, under some special occasions, [gaming employees] can inform the stationing supervisor in order to enter the casino with a proper reason. However, such special occasions will be few. We still hoped that there could be some flexibility, hence why we made this arrangement.”

Four bills related to the government budget and civil servants were passed at the Legislative Assembly yesterday. The four bills are the law for the 2019 budget, the bill for the exercise of offshore activity, the updating of retirement pensions, and the amendment of the civil servants’ statute. In the 2019 budget, the government expects a consolidated income of MOP122.385 billion, an increase of MOP14.35 billion or 13.3 percent compared to 2018. The general consolidated budget expenditure for 2019 is MOP103.34 billion, representing an increase of MOP2.23 billion compared to 2018. The amendment of the civil servants’ statute will give civil servants’ more annual leave flexibility once the law comes into effect. The amendment also increases the maximum number of leave days that can be accumulated and enjoyed in a year. The new law also means that civil servants will need their supervisors’ approval in order to take an annual leave. Lawmaker José Pereira Coutinho is worried that such a change may give higher officials more power and harm civil servants’ rights.

On the Lawmakers’ Agenda

THE EXAMPLE OF LUXEMBOURG José Pereira Coutinho listed a series of advances in Luxembourg to illustrate the fact that, in comparison, Macau is lagging behind. He pointed out Luxembourg’s free public transportation for people under 30 years old, the minimum wage of approximately MOP18,000, the language skills of the residents, and its democracy. “I have said so much already. We need to stop a bit and think, because the Macau SAR has been established for nearly 20 years, but we [Macau] are becoming more and more different from Luxembourg, which also has 600,000 people. What’s been the biggest failure in the past 20 years? And what can be done to make up for it and improve Macau residents’ life quality?” Coutinho asked.

HEARINGS Au Kam San believes that the Macau government is not willing to be subjected to residents’ criticism, as the local government does “not even dare to use a little powerful supervision tool [hearings].” Au said that “hearing[s] and having the right to call government officials and witnesses […] in order to investigate malpractices of both the government and government officials is the most important mechanism of the AL in supervising the government. However, in Macau, how come [a hearing] has never been successful launched?” Au’s previous motion for a hearing concerning the LRT was rejected at the AL.