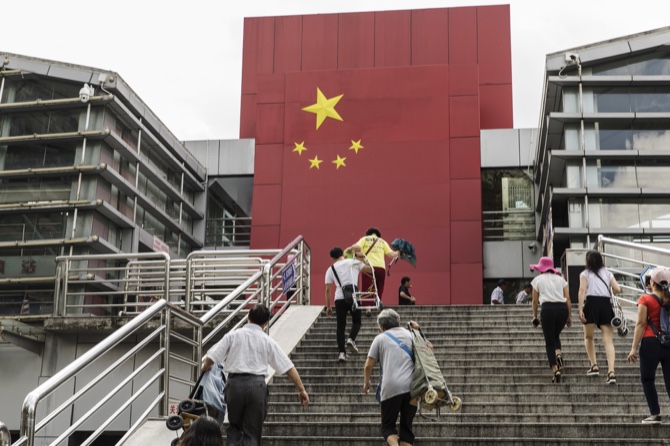 A law which proposes a maximum of three years imprisonment for behavior which publicly insults national symbols has been passed at the Legislative Assembly (AL).

The legal amendment that was passed relates to the national flag, national symbols and anthem.

Sulu Sou and Au Kam San expressed their opposition toward the article, which proposes imprisonment.

“Respecting or not should not be enforced by law. I oppose using criminal measures to handle it [respect]. Even in mainland China, the government uses administrative methods. But, in Macau, we are using criminal methods,” said Sou.

“Actually, the public power should [set] the example [in respecting the people],” said Sou.

The law also proposes to include anthem education in non-tertiary education institutions. Currently, 68 local primary and middle schools are teaching students about the Chinese anthem.

“It is already included in the educational frame[work]. It is not needed to be regulated here in this law,” said Au.

“Is anthem education going to include all the details regarding the anthem itself, such as the life of the lyricist [who was attacked and died in jail because of the Cultural Revolution in China, Sou noted], so that everybody knows about the development of the anthem and its history?” asked Sou.

On the lawmakers’ agenda

MAINLAND PROPERTY Leong Sun Iok hopes that the local government can establish a cooperation mechanism with mainland China authorities in order to take care of Macau citizens’ property purchases in mainland China.  Leong first noted that some local residents had fallen victim to mainland property traps because they were unaware of mainland laws and the mainland’s land situation.  He also criticized some real estate agencies and property developers for using fake promotional campaigns to attract buyers, including buyers from Macau. The lawmaker noted that the lawsuit procedure regarding Macau residents’ property purchase problems in mainland China takes a long time, which leads to local residents losing their money. Leong wants the local government to provide suitable protection to local residents who invest in properties across mainland China, and also to assist these residents in solving cross-border investment disputes.

RESPONSIBLE TOURISM Pereira Coutinho said that “the SAR government needs some measures based on responsible tourism.” “Streets mostly visited by visitors are becoming dirtier, and, due to the large number of tourists, the streets can’t be kept clean at all,” complained Coutinho. “The lack of a clear policy for sustainable tourism development, the lack of public morality and responsible tourism lead to the continuous increase of illegal guesthouses, dishonest sales of suspicious products and other situations,” said Coutinho.