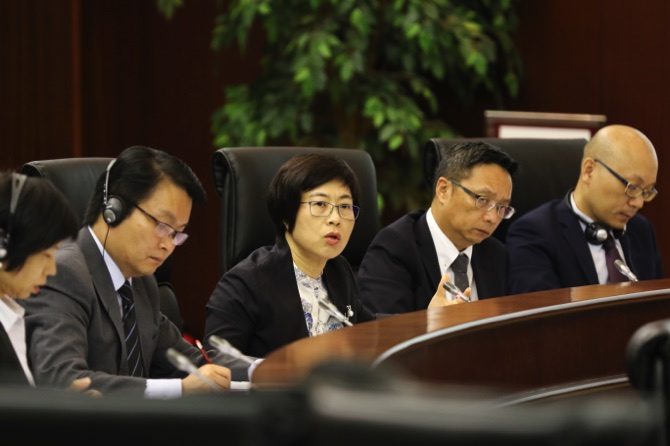 The concession agreement between the telecommunications service provider CTM and the government was one of the major topics addressed at the Legislative Assembly (AL) on its plenary meeting held yesterday.
From a total of 18 spoken enquiries to the government during the period before the agenda, five were specifically focused on the concession.
According to the calculations of lawmaker Chan Meng Kam, the first to address the topic, the compensation that the executive would have to pay in case of a termination of the contract would amount to approximately MOP3.1 billion.
The legislator also highlighted the fact that when the government signed the mid-term review of the agreement back in 2009, the aim was to achieve market liberalization. “However, five years have passed and the monopoly continues. Nowadays the market share of CTM is 100 percent of the [local] Internet [service] and on the telephone landline [privates]; and about 100 percent of data services. If the intention was to liberalize the market, then CTM has ‘made a hostage out of the emperor to control the court’,” Chan Meng Kam said.
The lawmaker added that the agreement grants the company a contract cancellation fee of such size as to equate the concession to a “fools” deal, adding that, “if the government continues to act ‘foolish,’ CTM will be a ‘maid bossing her own boss’,” urging the government to adopt a “proactive” attitude not just regarding CTM but also all other public utilities.
Also chiming in was Si Ka Lon, who claimed that the government’s intention, as outlined in the five-year plan, to build a “smart city” is set to fail since the telecommunication networks do not meet a sufficient standard. He blames the networks’ inadequacy on the monopoly service of CTM.
In his opinion, the CTM monopoly is to blame for the “lack of quality in services, the high rates and weak signals,” adding that he urges the government to enact  market liberalization for Internet services at a minimum.
Ella Lei and Kwan Tsui Hang also addressed the topic, assessing the terms of the contract to be “unfair and unreasonable” taking note of the fact that the “assets from the concession” that the company exploits, “belong to the government” and not CTM.
Kwan Tsui Hang termed the deal a “fake liberalization” since the concession continues to be solely operated by CTM. She cited several professionals from the business sector who according to Kwan have said that “renting communication circuits in Macau is several times more expensive than in neighboring regions.” Kwan also accused the telecommunications company of using “[government] assets for its own benefit and enjoyment,” stating that that now that the first five years of the so-called “5+5” contract are concluding, there is a great opportunity to review the terms.
Au Kam San, who slammed the “alliance” between the government and CTM, which in his opinion “prevents competition and favors CTM,” called for a mechanism to supervise concession contracts by the AL as a way to “stop the collusion of interests between the government and businessmen.”

‘only five articles were unblemished’

On the sidelines of the plenary meeting of yesterday at the AL, legislator Leonel Alves justified the criticism of the technical writing of the Animal Protection Law in its Portuguese version. “I noticed that only five articles were unblemished; all the others have writing problems, grammar issues and problems in the usage of terms. The worst is that some contain inconsistency on legal norms,” he said.
According to the legislator the problem is not fully limited to the Portuguese version as he claims that other lawmakers said similar inconsistencies could be found in the Chinese version.

on the lawmakers’ agenda

Nam Van Anim’Art cultural and leisure area “contributed to an increase in the tourism and leisure [activity] offerings in Macau,” according to Angela Leong. However the Nam Van space “has been lacking in attractiveness due to a lack of promotion and the fact that is [located] in a hidden place.” The lawmaker suggested the government to follow the example of Taiwan “demarcating wider spaces to focus both the stakeholders and the strength of cultural and creative industries in one place” transforming these areas in platforms with a real potential to boost these industries in the territory.

Hospital Song Pek Kei slammed what she called “the rhetoric” of government’s high officials that have been claiming, “the next five years will be brilliant for the health sector.” The lawmaker criticized the strategy followed by the government to manage the construction and improvements to health service facilities.
According to the lawmaker the fact that the “Health Bureau is responsible for the construction of the new hospital “makes no sense, since they are experienced in terms of requirements for medical equipment but non-specialist in construction matters.”

Land Law Mak Soi Kun and Zheng Anting said “specialists and scholars from the legal sector” regard the “government practice of transferring the responsibility to correct their mistakes to the judiciary institutions as very problematic,” and “could lead the MSAR to suffer in terms of time, money and political reputation.”
Mak Soi Kun added: “The government continues to have a rigid interpretation of the deadlines imposed by the new Land Law highlighting that is acting in accordance with the law.” He said that the idea to claim back all the expired concession lands without a care for “accountability” creates clear “non-compliance in both legal and rational terms.”