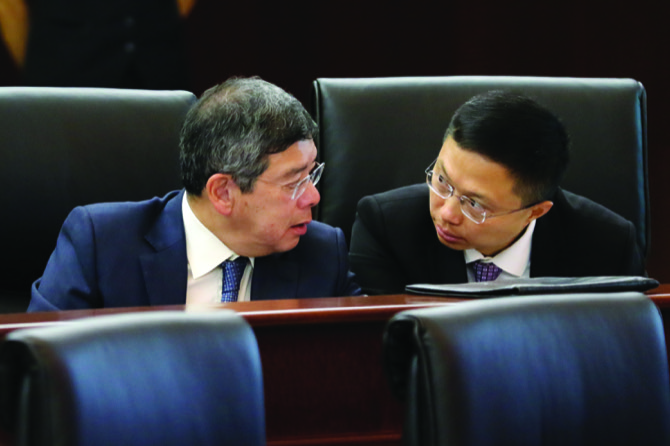 The Secretary for Transport and Public Works, Raimundo do Rosário, assured yesterday at the Legislative Assembly (AL) plenary session that the works being done at the Border Gate bus terminal will be ready by Christmas, noting that “it will be a Christmas gift to the population.”

The Secretary was speaking at the AL replying to lawmakers on a debate proposed by lawmaker Sulu Sou almost one year ago, before Sou’s mandate was suspended.

In the presentation, Sou noted that the part of his original debate proposal, in which he questioned whether works should continue, had become outdated given a year had elapsed and the project is now almost concluded. However, he noted that the second part of his proposal which suggested a broader discussion on the future developments of the area, “can benefit from the fact that one year has passed and now we have a more clear picture about what happened during this time.”

According to the Sou, “the government has spent a lot of money on different occasions to improve the terminal but, in fact, the facility does not look like it has improved that much.”

During the portion of the debate where lawmakers can question the government directly in a question and answer system, many lawmakers wanted to know about the current status of the works as well as the decision on which bus routes will return to the Border Gate terminal after the conclusion of the works. Ma Chi Seng and Ip Sio Kai were two of the first to ask questions on the topic, asking similar questions to Sou’s proposal about the plan of the “transport hub” to be built in the Border Gate area.

Rosário replied saying, “regarding the transport hub, we had a plan [which resulted from a study from 2012] but it was good that we did not move forward  right away.” He elaborated that the initial project planned for a significant part of the infrastructure to be built on underground levels, which the Secretary noted was out of the question for safety reasons, especially after the effects of the recent typhoon strikes. He noted, “it was good that we didn’t do it right away. Now we have a chance to improve. Two months ago we initiated a new study [for the new transport hub project].”

According to the Secretary, the fact that damage caused by Typhoon Hato forced the government to close the terminal and redistribute the bus routes and stops in the area “was, in fact not that bad. I think we can conclude that not all 24 routes should return to the terminal [when it reopens].” 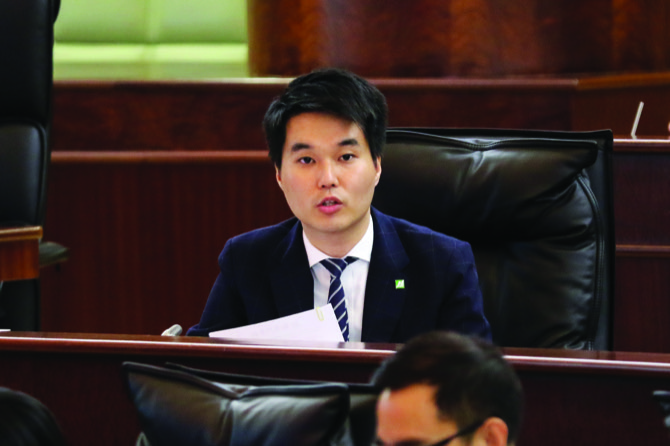 Lawmaker Sou insisted to know exactly which bus routes will, in the near future, return to bus terminal and which ones would not, questioning also how much the government invested in the works of the terminal, and the status of the relocation of the headquarters of the Police Tactical Intervention Unit (UTIP) from the Border Gate to Pac On area.

To these questions, Rosário replied, “small works about MOP1 million, the medium-size works around MOP20 million and for the large ones, MOP120 million.”

He replied to several lawmakers that is not yet possible to be certain which bus routes will return or not return to the terminal since the decision is not in the hands of the government alone. “We are discussing and negotiating with the bus concessionaires [too],” Rosário said, noting also that these decisions must pass through the Transport Advisory Committee.

Speaking on the differences between the transport hub study of 2012 and expected changes, Rosário noted, “we may continue to use B1 and B2 [levels] but not [dig] 27 meters under.” He pointed out that one of the bigger changes has to do with a planned station of the Light Rail Transit (LRT) that was initially planned to be on an underground level, but will no longer be located underground.

On the relocation of the headquarters of UTIP to Pac On, the Secretary announced the works would cost around MOP100 million, noting in reply also to Angela Leong that, “As for the Workers Sports Ground, we need to ask you to be a little more patient; we are finding a solution.”

In relation to the performance of the public works, Rosário said, “we are not that bad, nor too good, we are in the middle.” He additionally remarked that the advances which will allow the opening of the bus terminal earlier than expected are directly related to an order from the Chief Executive regarding the exemption from the “noise law” in that area, which allowed the construction works to run round the clock.

Although he announced the opening of the terminal as a “Christmas gift,” Rosário warned, “It will open in Christmas but the works will not be [at that time] fully complete. There will be minor works that will still continue. We hope that we can have it fully operational by the Chinese New Year.”