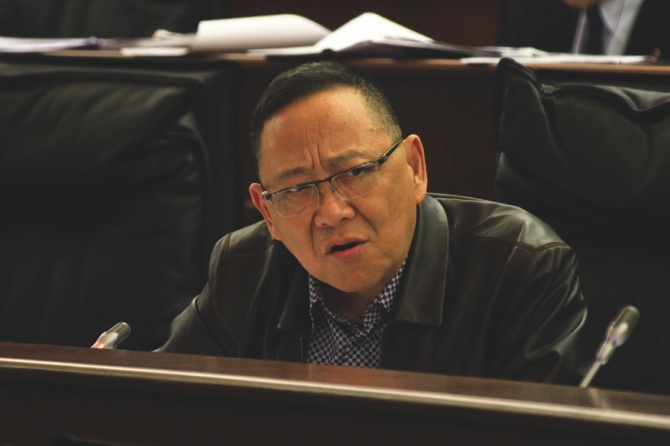 Fong Chi Keong was, as usual, the most vociferous in his opposition to the law

It was the eighth failure to pass a Trade Union Law in the Legislative Assembly (AL).  Twelve lawmakers voted in favour and 15 against the bill that was raised by lawmakers linked to the Macau Federation of Trade Unions (Kwan Tsui Hang, Lam Heong Sang, Ella Lei). The result was not closer because lawmaker José Pereira Coutinho, who is currently in Lisbon, was absent.

Although rejected again, the law seems to have gained more support from the lawmakers. Several concerns were raised by the opponents, for instance, it was questioned whether this was the right time to establish such a law when Macau’s economy is still in recovery.

The question of how it will be possible to define a trade union when Macau has more than 7,000 associations was asked again, as well as how the new law could meet the requirements of international agreements and of the MSAR Basic Law.

These three topics were the ones that drew the most attention from the opposing lawmakers. Many of them also pointed out that the current labor affairs law is able to protect the rights of employees, so there is no need to establish a trade union law.

Tsui Wai Kwan voiced his support of the establishment of such a law, however, he acknowledged that now would not be the right time. “The economy is still not diversified enough; the single [gaming] industry is still weak. The current industry is not prepared for embracing the great impact [that will be generated by the laws],” explained Tsui. The lawmaker believes that in the present moment “there are no conditions […] to adopt this law.”

Ng Kuok Cheong argued that the economy does not have any bearing on the likelihood of the law being passed. “When Macau’s economy was in its peak and Macau was at the top of the world, the law was rejected. There is no reason for it to be rejected again,” said Ng.

In the articles written down in the law, a penalty system says that a maximum fine of MOP250,000 might be applied to employers when they break the law.

Fong Chi Keong was, as usual, the most vociferous in his opposition to the law. He believes that, according to what is written in the articles, SMEs would not be able to survive, as any complaints coming from employees can lead to a fine levied against the employers.

“Since I was born until now, there was never a trade union law, it has always been about fines and nothing happened. This law will ruin the whole society, because it will create a special social class. I don’t want to see this class,” said Fong. “Almost in every legislature, we receive a trade union law proposal. That means that such law is not needed. Why do you insist?” he said. According to Fong, the only problems in Macau related to unscrupulous employers happen in the construction industry and are not generalized. “There is already a Labor Law, society is harmonious and tolerant, associations have space to express their opinions.”

Gabriel Tong expressed strong doubts towards the bill, saying, “these laws cannot fill in the gap in terms of trade union laws in the territory, and they are unable to comply with international agreements. If it is passed, all those who voted pass should explain this to the society.”

The last point that was discussed was brought forward by Melinda Chan. She questioned if the law would include expat workers besides Macau residents.

The law’s proponents, including Kwan Tsui Hang, remarked that no workers should be excluded from the trade union laws. Julie Zhu

Financial entities will not encounter inconvenience under the regions’ latest version of laws regarding the prevention of money laundering activities, the Secretary for Economy and Finance, Lionel Leong, said during yesterday’s Legislative Assembly meeting.

Lawmakers passed the amendments of two laws, including the aforementioned. The other law is related to anti-terrorism.

According to the law, financial entities are now required to check their clients’ basic identities and are obliged to preserve this information.

Lawmaker Gabriel Tong agreed with the amendments, although he also raised his doubts. He said that the amendments comply with international standards, and are also related to the development of Macau. However, he questioned if the authority has taken financial industry’s convenience into consideration.

Leong, in reply to Tong’s question, said “it will not cause inconvenience to the financial industry.”

He claims that the industry has been conducting a series of measures which comply with the new amendments. “The financial entities, they do basic background confirmation. The big transactions are not included in the group whose background is being checked. However, [when a] continuous business relationship [takes place] with the financial entities, and when the activity is producing more values, then the customers should be inspected,” explained Leong.

“The parking lots are built with public money, […] DSAT does not check the receipt handed in by the companies afterwards. It’s a world-class joke,” said Chan.

Transportation: Zheng Anting is worried about Macau’s cross-sea transportation, which he considers to be lagging behind, thus affecting the city’s economic and social development. The government wrote down on the region’s five-year plan that the fourth cross-sea bridge will be put into operation in 2020. Zheng thinks that the bridge cannot help ease the transportation pressure alongside the region between the center of the Macau peninsula and Taipa. He suggested the government to rebuild the Governador Nobre de Carvalho Bridge as well as to consider rebuilding it into a six-way bridge with specific lanes for motorbikes. He also pointed out that the government should consider building a tunnel at the roundabout at the junction of the Taipa Olympic Centre and the Galaxy.

Rising populism: Tsui Wai Kwan addressed the fact that populist beliefs are increasing among the residents of the city. Tsui said that the reaction to the latest two typhoon predictions have led the government’s administration to feel affected by populism. He added that the public criticism towards the meteorological authority’s predictions for typhoons Nida and Haima have rendered the department unable to raise the right signals. Society’s doubts towards the planned containment buildings, which will meet WHO standards, have proved that the populism is already making an impact on the formation of laws. He stated that if the government continues to be swayed by populism, there will be horrible consequences. “Making decisions based on subjective expectations is called the rule of man, not the rule of law,” said Tsui, adding that the public’s attitude should guide legislation onto the right track.