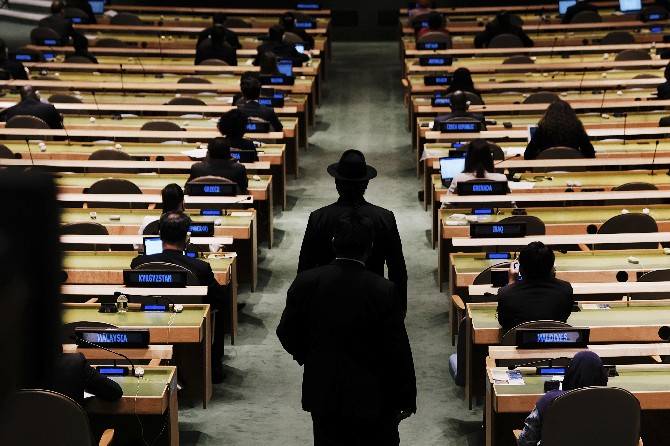 When the United Nations rose from World War II’s rubble, its birth reflected a widespread aspiration that humanity could be lifted up and dispatched down a positive path — if only there was a coherent, informed, unified effort of good faith among countries and their leaders. That would require persistence, compromise and, above all, hope.
Four generations later, the theme of this year’s mid-pandemic U.N. General Assembly leaders’ meeting reflects that ideal: “Building resilience through hope.” But at U.N. headquarters this week, while persistence seems abundant, hope is a scarce commodity.
The General Assembly is unfolding this week under a thundercloud of deep pessimism. Coherence is spotty. Two growing kinds of unwanted information — mis and dis — are scurrying around unchecked. And that unified effort of good faith? It feels absent, if not outright outdated, in an era when those responsible for the rest of us can’t even agree to check at the door to see if everyone is free of the deadly virus that has upended humanity’s best-laid plans.
“Our world has never been more threatened, or more divided,” the U.N. secretary-general, Antonio Guterres, said this week, setting the tone with his first words as he opened the meeting. “The world,” he said, “must wake up.”
But the leaders he summoned are fragmented and cranky and, to hear them tell it, unsettled and intimidated by pandemic, polarization and climate-fueled natural disaster. And the question that leaders keep implying at the United Nations this week, in speech after speech, is both one of the most basic and intricate that there is: What on Earth do we do now?
Part of the answer — or at least, a clue to why it hasn’t been answered yet — is contained in the nature of the United Nations itself.
For nations to commit to being united — and to actually follow through — isn’t easy in a fractured world brimming with problems that often come down hardest on the least powerful. The notion of nations playing on a level field may sound fair and just, but smaller countries insist that principle crumbles when power dynamics come into play.
What’s more, the whole concept of “multilateralism,” an ever-present U.N. priority based on distributed solutions and layers of agreements that gives smaller countries a voice, clashes with the mythology of charismatic leadership embraced by the West for centuries.
Overlaid atop all that is the problem that the United Nations’ structure doesn’t match the era in which it is operating — something its leaders and members have long acknowledged. This is, remember, an organization founded in an age — the mid-20th century — when many of the best and brightest believed the world could act in concert and coherence.
Yet even in the context of nations united, a significant power imbalance was baked in from the outset. The United Nations built its greatest authority into a council with five permanent members that represented the world’s most powerful and dominant nations. Inevitably, they often operated with their own interests in mind.
That structure remains to this day, and some call it out of step with a fragmented world where many voices not amplified in the past are increasingly expecting to be heard and heeded. African nations, for example, have been demanding for years to have permanent representation on the Security Council for their 1.2 billion people. “We must eradicate hierarchies of power,” Sierra Leone President Julius Maada Bio said.
So far, though, that hasn’t happened. And many leaders, particularly of smaller nations, consider such inequities antithetical to the whole point of the United Nations — a place that represents all of them and forms a whole that benefits all of them as well.
Not that progress is entirely absent at the U.N. meetings. Both the United States and China took notable, separate steps forward in efforts to reduce the carbon emissions that power global warming. And this time last year, no vaccine for the coronavirus had been deployed; today, billions have been injected with one of several iterations.
“Indeed, we are in a much better place than a year ago,” Slovakian President Zuzana Caputova said. And from Romanian President Klaus Iohannis: “While the pandemic affected almost all aspects of our lives, it also provided us with opportunities to learn, adapt and do things better.”
Have those opportunities been seized? Guterres, for one, is skeptical, and he isn’t alone. The emotional, psychological and political baggage of a world reeling from unremitting crises is evident this year. Even compared with two or three years ago, leaders’ words and thoughts are peppered more with desperation, with exhortations like this one from Egyptian President Abdel Fattah el-Sissi: “Let us stand together to save ourselves before it is too late.”
And take the remarks of Ecuadorean President Guillermo Lasso Mendoza. When he said that “health has no ideology,” he was making a larger point. Yet he hit on part of the problem: Everything is political. Health, it turns out, has revealed fissures in ideology that were festering elsewhere but that the pandemic laid bare. Same story with climate change, as leaders reeling from a summer of natural disaster sounded ever-louder alarms.
“The world – this precious blue sphere with its eggshell crust and wisp of an atmosphere – is not some indestructible toy, some bouncy plastic romper room against which we can hurl ourselves to our heart’s content,” British Prime Minister Boris Johnson, channeling the global mood in his uniquely colorful way, said yesterday.
“The U.N.,” said Ukraine President Volodymyr Zelenskyy, “is like a retired superhero who has long forgotten how great they once were.”
So this week, they’re here. They’re talking. They’re still committed, still determined. Yes, the topics may veer toward existentialism and extinction, but they’re still promising — in oceans of speechified words and ideas and plans — to figure it all out and not simply go down with the ship. Perhaps — again, staying on brand — that’s building resilience through hope after all. TED ANTHONY, NEW YORK, MDT/AP