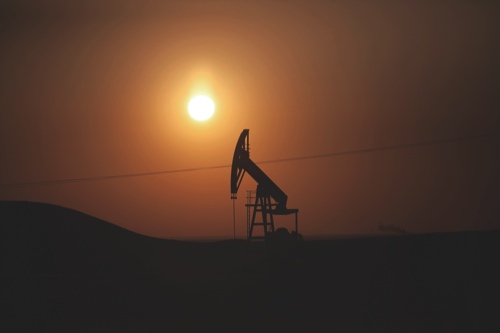 A view of an oil field under control of Kurdish militias near the town of Deriq, in a Kurdish area of Syria, near the border with Iraq

Islamic State militants, who once relied on wealthy Persian Gulf donors for money, have become a self-sustaining financial juggernaut, earning more than USD3 million a day from oil smuggling, human trafficking, theft and extortion, according to U.S. intelligence officials and private experts.
The extremist group’s resources exceed that “of any other terrorist group in history,” said a U.S. intelligence official who, like others interviewed, spoke on condition of anonymity to discuss classified assessments. Such riches are one reason that American officials are so concerned about the group even while acknowledging they have no evidence it is plotting attacks against the United States.
The Islamic State group has taken over large sections of Syria and Iraq, and controls as many as 11 oil fields in both countries, analysts say. It is selling oil and other goods through generations-old smuggling networks under the noses of some of the same governments it is fighting: Kurdish-controlled northern Iraq, Turkey and Jordan.
While U.S. intelligence does not assess that those governments are complicit in the smuggling, the Obama administration is pressing them do to more to crack down. The illicit oil is generally transported on tanker trucks, analysts said.
“There’s a lot of money to be made,” said Denise Natali, who worked in Kurdistan as an American aid official and is now a senior research fellow at National Defense University. “The Kurds say they have made an attempt to close it down, but you pay off a border guard you pay off somebody else and you get stuff through.”
The price the Islamic State group fetches for its smuggled oil is discounted —$25 to $60 for a barrel of oil that normally sells for more than $100 — but its total profits from oil are exceeding $3 million a day, said Luay al-Khatteeb, a visiting fellow at the Brookings Institution’s Doha Center in Qatar.
The group also has earned hundreds of millions of dollars from smuggling antiquities out of Iraq to be sold in Turkey, al-Khatteeb said, and millions more from human trafficking by selling women and children as sex slaves.
Other revenue comes from extortion payments, ransom from kidnapped hostages, and outright theft of all manner of materials from the towns the Islamic State group has seized, analysts say.
“It’s cash-raising activities resemble those of a mafia-like organization,” a second U.S. intelligence official said, reflecting the assessment of his agency. “They are well-organized, systematic and enforced through intimidation and violence.”
Even prior to seizing Mosul in June, for example, the group began to impose “taxes” on nearly every facet of economic activity, threatening death for those unwilling to pay, U.S. intelligence officials say. An analysis by the Council on Foreign Relations estimated the group was reaping $8 million a month from extortion in Mosul alone.
Once the group took over Mosul, in northern Iraq, and other areas, it grabbed millions of dollars in cash from banks, though not the hundreds of millions initially reported, U.S. intelligence officials say.
This spring, four French and two Spanish journalists held hostage by Islamic State extremists were freed after their governments paid multimillion-dollar ransoms through intermediaries.
The Islamic State group “has managed to successfully translate territorial control in northern Syria and portions of Iraq into a means of revenue generation,” said a third U.S. intelligence official.
Analysts say the group is relying on the fact that the area along the border between Iraq and Turkey has long been a smugglers haven, and was made more so by the fall of Iraqi leader Saddam Hussein in 2003. Generations of families have illicitly moved goods through the region.
The Islamic State is the successor to al-Qaida in Iraq, which was founded by Jordanian Abu Musab al-Zarqawi. For a time, the group was allied with the Nusra Front, the al-Qaida affiliate that is a key player among the rebels battling Syrian President Bashar Assad. The Islamic State group has since broken with the Nusra Front and al-Qaida.
In the early days of the Syrian civil war, the Islamic State group was funded in large part by donations from wealthy residents of Gulf States, including Kuwait and Qatar, American officials have said.
“A number of fundraisers operating in more permissive jurisdictions — particularly in Kuwait and Qatar — are soliciting donations to fund … al-Qaida’s Syrian affiliate, the Nusra Front, and the Islamic State of Iraq and the Levant (ISIL),” David Cohen, the Treasury department’s top counterterrorism official, said in a speech in March. ISIL is an alternative acronym for the Islamic State group.
That stream of funding has diminished in recent months as the group’s violent tactics have drawn worldwide attention, U.S. intelligence officials say.
The group’s reliance on oil as its main source of revenue could easily be disrupted by American airstrikes, officials say. But so far, no decision has been made to target Iraqi or Syrian oil infrastructure, which is serviced by civilian workers who may have been conscripted. Ken Dilanian, Washington, AP