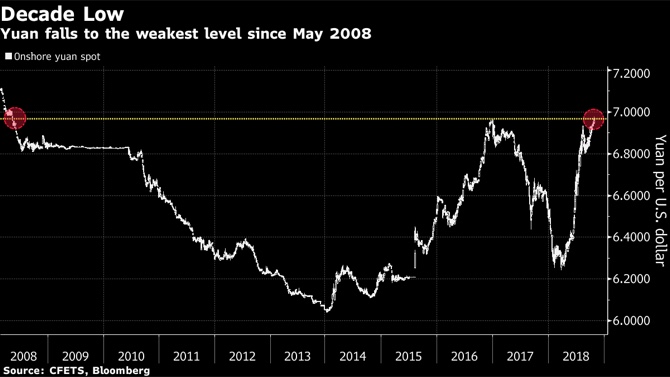 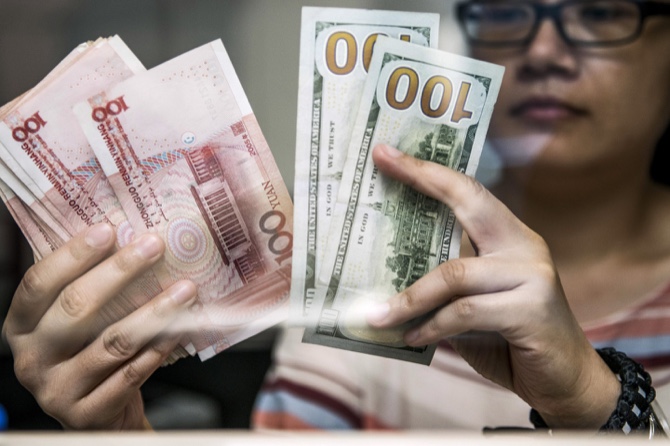 The weakness of China’s yuan, which yesterday touched its lowest level in a decade, has the potential to hurt Macau’s economy just as gaming revenues are showing signs of a strong recovery.

Sandwiched between the economic superpowers of China and the U.S., Macau is seeing a rise in its consumers’ purchasing power, while at the same time consumers from its primary export market are finding local goods and services increasingly expensive.

The yuan touched the weakest level since May 2008, as the central bank cut its daily fixing and on signs that a trade war with the U.S. may escalate. The currency declined as much as 0.15 percent to 6.9724 per dollar in Shanghai, within 0.5 percent of 7 – a level that hasn’t been reached since the global financial crisis.

The Macau pataca is fixed to the Hong Kong dollar, which in turn is pegged to the U.S. dollar. As the USD strengthens against the yuan, so does the pataca.

In terms of gaming – Macau’s economic backbone – both mainland and VIP customers are likely to be affected. In recent months analysts have warned of waning VIP interest, which has led brokerage houses to revise downward their forecasts for end-year gross gaming revenue.

The mass segment is likely to take a hit too.

The 10 percent fall in mainland purchasing power extends not only to the casino floors, but to the wider hospitality and retail sectors, whose revenues rely on both the volume of Chinese visitors and their propensity to spend.

However, local economist José Sales Marques told the Times that though the purchasing power of the Macau pataca will rise relative to that of the RMB, how that will reflect on consumer spending in the Macau SAR remains unclear.

“It’s difficult to forecast the impact,” he said. “I think that the RMB exchange rate is of course important to Macau’s economy, but [the effect] also depends on the average exchange rate of the previous year or so, and what people think will happen in the future. Consumer behavior is not instant nor mechanical […] people learn to adapt to the new market conditions and alter their consumer behavior slowly and in ways difficult to predict.”

Economy policymakers in Beijing will be watching the situation carefully, weighing their options for market intervention.

In the past, China has sought to keep its currency trading within a specific band seen as conducive to the development of the country’s fast-growing economy.

A weaker yuan has its benefits too. In terms of global trade, a weaker currency usually makes a country’s exports more competitive and that alone can be a boon to economic growth.

Let the yuan slide too far, however, and China risks encouraging an outflow of capital from the world’s second-largest economy, raising borrowing costs at a time when its leaders are trying to shore up cooling growth.

Moreover, as China looks to transform its economy from being predominantly export-led to one fueled by domestic demand, central planners must consider the effect that a falling yuan has on the ability of businesses and consumer to acquire goods and services from abroad.

“A stronger dollar means imports [in China] will be more expensive,” said Sales Marques, adding that it was not clear whether the lower value of the RMB was a blessing or a curse in the context of the trade war. Instead, it simply “reflects how the market is reacting to current affairs between the U.S. and China.”

At a briefing in Beijing on Friday, People’s Bank of China Deputy Governor Pan Gongsheng said the central bank will take macro-prudential measures to stabilize expectations in the foreign-exchange market, and that it is confident the yuan will be kept basically stable at reasonable levels.

The People’s Bank of China has been trying to make its exchange rate mechanism more efficient by increasing the role of market forces. The exchange rate is set each morning and allowed to fluctuate by 2 percent against the dollar during the day. The central bank can buy or sell currency — or order Chinese commercial banks to do so — to dampen price movements.

Though U.S. President Donald Trump has repeatedly accused of Beijing of market manipulation via deliberate devaluation of the yuan, this time market forces are largely to blame, and the pressure shows little signs of abating.

“Depreciation pressures are intensifying,” Gao Qi, a currency strategist at Scotiabank in Singapore, told Bloomberg. “The yuan won’t slide to 7 a dollar before Xi and Trump meets [next month]. But if that meeting fails to improve China and U.S. relations, a drop to 7 will likely be inevitable.”

“A breach of 7 could intensify depreciation expectations, and cause renewed capital outflow pressures, which will be destabilizing for domestic financial markets,” added Khoon Goh, head of research at Australia and New Zealand Banking Group Ltd. in Singapore.