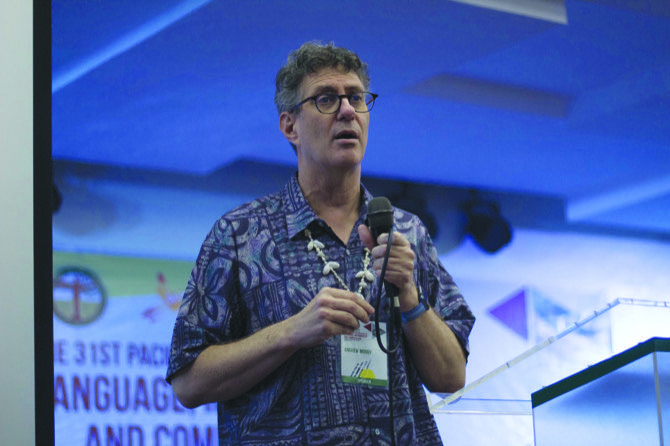 Last month, Andrew Moody, an associate professor at the University of Macau was appointed by Cambridge University Press as the editor of the English Today journal for a five-year term. Moody’s post began on January 1, 2018.

In a statement, the University of Macau described English Today as a “prestigious peer-reviewed journal devoted to […] the English language and its many forms and functions as an international language.”

Professor Moody now leads the international editorial team of the journal. Prior to that, he served as a member of the editorial board of English Today and has contributed to the journal as an author.

In Macau, the academic is perhaps best known for his 2008 paper, “Macau English: Status, functions and forms”, in which he argued that although English has no institutional status in Macau, it had become a de facto official language.

Speaking to the Times last week, Moody said his priority is to encourage more peer reviewed work and more detailed research in journal submissions. He also wants to encourage a broader acceptance of the different forms of ‘world Englishes’, particularly those used in the Asia-Pacific region, as the journal becomes more and more well known among Asian readers.

The Times interviewed the professor to find out why the journal is gaining more traction in the Asia-Pacific and how English and Chinese continue to influence each other in cultural crossover points like Macau.

Macau Daily Times (MDT) – The journal is receiving an increasing amount of attention in Asian countries, most of which do not use English as an official language. How purist is the editorial team in regards to monolingual English?

Andrew Moody (AM) – Of course, inner circle communities – like in Australia, the U.K. or the U.S. – tend to preserve English better, [but] I am open to Asian varieties of English, not strictly the monolingual English [of Anglo-Saxon-majority countries].  That has been the policy of the journal in the past. All of the predecessor [editors] were strongly committed to being open to different varieties of English; ‘world Englishes’ or expanding circle varieties. These expanding circle varieties have been growing since the end of World War 2.

But I am interested in [going further] with others in Asia like Hong Kong English, Singaporean English and so on.

MDT – Is the interest in Asian jurisdictions like Macau a result of a general improvement in English-language proficiency?

AM – The last 15 years has seen a huge increase in the amount of English use. I looked at the stats recently, and there is about a 50-50 chance that people between the ages of 18 and 40 will speak English [in Macau].

Better quality education might be behind this. Parents, for example, love the number of new English-speaking schools in Macau. At the same time, it is interesting [to note] that the number of Mandarin speakers is also steadily increasing.

MDT – Certain words borrowed from English are used in daily, often colloquial, conversation in Cantonese in Macau and Hong Kong. Is this intrusion welcome?

AM – They are known as loanwords or borrowed words. There are certain English words that are used a lot [in Cantonese-language conversation], but not because there is no alternative in Cantonese. [The speakers] don’t have to use an English word.

I suppose some people would see it that way [as an intrusion]. Every time you have a language that is already standardized, there is a tendency to try to purify it. However, I don’t think that Cantonese speakers see English in this way; as a threat to their speaking of Cantonese. It is a theoretically-driven argument, not really relevant to reality.

MDT – Is the Chinese language susceptible to importing words from other languages?

AM – Chinese has a built-in resistance to that spread [of borrowed words] because of the writing system. It makes it difficult to adopt words that can’t be easily written in Chinese.

In English, any sentence is only about 50 percent Anglo-Saxon. The rest are borrowings from French and Latin mostly, but also others,  even Chinese.

The alphabetic system has made this easier to borrow words. The Japanese can borrow words easily because they have a writing system they adapted for loan words.

MDT – With the emerging importance of the Chinese language for business with one of the world’s largest single markets, do you expect to see many more Chinese words in English-language conversation?

AM – I think it’s already happening. We already see Chinese loanwords in English. That phenomenon really picked up in the 19th and 20th centuries, with expressions  like ‘barefoot doctor’, ‘iron rice bowl’ and ‘to lose face’. These are all Chinese expressions.

Some famous expressions in English are thought to have come from pidgin languages [simplified and localized versions of their lexifiers], such as ‘long time, no see’.

Some people claim this expression came from pidgin English, but we are not sure where it comes from officially.  We do know that Chinese pidgin English developed partly in Macau in the 18th and 19th centuries.