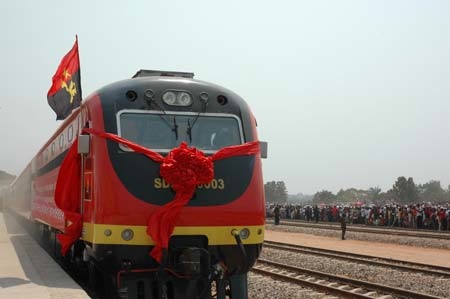 Completion of reconstruction work on the Benguela Railway in Angola will have a positive effect on the economy, by stimulating sectors such as agriculture and diamond mining in that area of ​​the country, said the Economist Intelligence Unit (EIU).
The project, which is being carried out by China Railway Construction, one of China’s largest construction groups, involved reconstruction of 1,344 kilometers of the railway and took around 10 years and repairs or construction of 67 stations costing USD1.83 billion.
In its latest report on Angola, the EIU said that economic growth forecasts for Angola should be revised upwards to accommodate the impact of the railway. The next step could even be privatization, as it is “essential that these potentially valuable assets are not transferred too cheaply or to companies with insufficient capacity to be successful.”
In the case of Luanda, over the past 18 months railway company Caminhos de Ferro de Luanda (CFL) has operated the 400 kilometers of railway linking the capital to Malange, the center of agricultural production in the country, but has faced high operating costs which are “heavily subsidized,” the EIU said.
The EIU also noted that a private investor is sought to start operating the railroad on a commercial basis.
The Benguela Railway links the port of Lobito to the border with the Democratic Republic of Congo and plans are underway to strengthen links to the Congolese border, which would provide an alternative route for mineral exports from the neighboring country, which are currently limited to South Africa.
The Angolan government has been studying the merger of the management companies of the country’s main railway line, rebuilt using credit lines from China, and is expected to hand over their management while maintaining a controlling stake in a new company, Caminhos de Ferro de Angola, which would keep the rail infrastructure.
The new company will result from the merger of management companies Caminho de Ferro de Benguela (CFB), Caminho de Ferro de Luanda (CFL) and Caminho de Ferro de Moçâmedes (CFM).
The development plan of the Integrated Railroad System, approved by the Angolan government, provides for connection of the three railway lines to the rail networks of neighboring countries – the Democratic Republic of Congo, Zambia and Namibia.
The way Benguela Railway (CFB) will therefore be connected to Zambian Railways, through a special extension between the station at Luacano in Moxico province, and the Lumwana line, which is under construction in Zambia.
The Namibe Railroad (formerly Moçâmedes) will connect to the Namibian railway system, starting at Cuvango station, over a distance of 343 kilometres, to Oshikango in Namibia close to the border with the Angolan province of Cunene.
Studies are underway for construction of the Congo Railroad, which will link Luanda to the provinces of Bengo, Uige, Zaire and Cabinda, over a distance of 950 kilometers and then on to the Chemin de Fer Congo Ocean, in Congo Brazzaville.  MDT/Macauhub