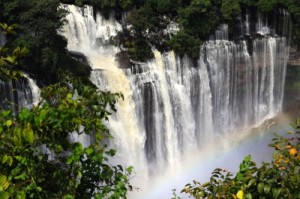 The Kalundula Falls, located 85 kilometers from the city of Malanje, are the largest falls in Angola and one of the country’s touristic attractions

Angola expects to receive 4.7 million tourists in 2020, according to a forecast announced Thursday in Lisbon by the Director of the Angolan Institute of Tourist Promotion (Infotur), Eugene Clement, cited by Angolan news agency Angop.
At a meeting to raise awareness amongst Portuguese agents of the third edition of the “Bitur-Okavango” International Tourism Exchange in Angola, Clement said “cultural heritage, sport, sun, sea and nature are key components for economies of scale and investment in the tourism sector in Angola. ”
The third edition of the Angola International Tourism Fair, known Okavango, takes place from 9 to 12 October in Luanda, under the motto, “A reality, a challenge, an opportunity, a source of revenue and employment.”
The Angola International Tourism Exchange “Bitur-Okavango-2014″ aims to boost domestic tourism and attract international partnerships, as well as to promote the tourism and hospitality industry, as well as promote travel agencies and natural attractions.
The fair, sponsored by the Ministry of Hotels and Tourism, will include participation of national and international companies, including airlines, travel and tourism agencies, hoteliers and tourist developments.
The director of the Luanda International Fair (FIL), Suzana Gomes, present at the meeting, highlighted the fact that 44 percent of the 1.5 million foreign tourists that visited Angola in 2013 came from Europe, especially Portugal.
She also pointed out that between 2012 and 2013 Angola was the fifth most popular country as a holiday destination for Portuguese tourists after France, the UK, Germany and Spain.  MDT/Macauhub