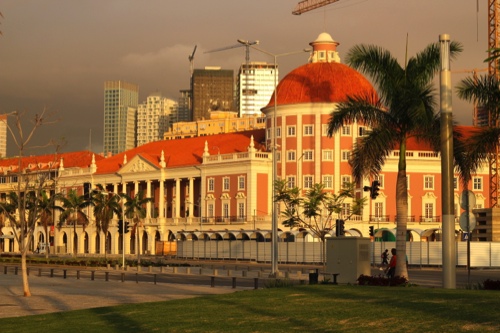 The National Bank of Angola headquarters in Luanda

The large size of Angolan investments abroad, namely in Portugal, is already reflected in the country’s statistics, which showed that in 2013 Angola was the only country in Africa that made more investments than those it received from abroad.
Figures from the United Nations Conference on Trade and Development (UNCTAD), cited by financial news agency Bloomberg, put Angola, Mozambique and Sao Tome and Principe amongst the African countries that attracted most foreign investment last year.
In fact Mozambique was the Portuguese-speaking country that received most investment, considering the country’s population – the equivalent of USD248 per capita, only behind Gabon (US$550), the Republic of Congo (US$496), Namibia (US$321), Mauritania (US$320) and Liberia (US$268).
Most of the studies available point to a continued high inflow of foreign investments to Mozambique, given the size of natural gas projects and related infrastructure support, as well as other ongoing mining projects.
Sao Tome and Principe is also well placed, with US$168 per capita, ahead of South Africa and Zambia, while Angola is higher, with US$219, although it has the distinction of being the only African country “that made more investments than those it received” from abroad, according to the Bloomberg analysts.
Angolan state oil company Sonangol has spearheaded Angolan investments abroad in recent years, notably in the energy sector in Portugal (Galp Energia), Brazil (oil exploration), Sao Tome and Principe and Cape Verde (fuel distribution and logistics).
Some of the latest investments include banking, Sonangol being the main shareholder of the largest Portuguese private bank, Millennium bcp, as it recently accompanied a capital increase involving investment of almost 435 million euros, according to the Africa Intelligence Monitor.
More recently, Angolan private groups have begun to take an interest in the construction and banking sectors, especially in Portugal, with businesswoman Isabel dos Santos leading the way.
The daughter of President José Eduardo dos Santos, listed by Forbes magazine as the first African female billionaire, shares control of Portuguese telecommunications operator Nos, with Portugal’s largest private group Sonae, is one of the largest shareholders of Banco BPI and continues to increase her investments.
More recently, other Angolan businesspeople have taken stakes in the media sector, as is the case of António Mosquito in the Controlinveste group and Álvaro Sobrinho in weekly newspaper Sol and, now, in daily newspaper “I”.
The fact that Angola has is now a provider of foreign direct investment (FDI) is particularly surprising given the large volume of investments that Angola has received in recent years, particularly in oil exploration, natural gas exploration and road and rail infrastructure.
On UNCTAD’s FDI list, Cape Verde and Guinea-Bissau are ranked more modestly, with US$39 and US$9 per capita.
Analysts Jeanna Smialek and Jeff Kearns largely relate the level of investment Africa is receiving to efforts made by China, which is already the largest trading partner with Africa as a whole, and to attempts by the United States to take on a major role once again.
“China’s investments in sub-Sharan Africa have increased 40 fold since 2003 and its state-owned enterprises have been able to implement projects quickly in all of the continent’s countries, especially works like building dams on the Nile, highways to oil regions and railways to carry copper,” Bloomberg said.
More recently, China, in partnership with the African Development Bank, launched construction of garment and other factories, whilst also opening up its own market to African imports.
“Chinese and American investments in transport and electricity should make it easier for African companies to carry goods and services to and from the continent,” and it is hoped that this will bring an increase in African per capita income, Bloomberg said. MDT/Macauhub