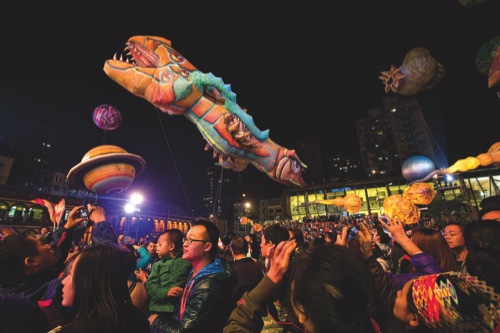 Over 2,000 performers paraded in the streets through Macau’s historic center yesterday for the annual celebration of the city’s return to China. This year, the joint performance attracted an audience of over 80,000 who watched live, on television, or on various outdoor screens, according to the organizer.
For its 4th edition, the “Parade Through Macao, Latin City” chose an extraterrestrial storyline, with large sea creature balloons and alien-dressed dancers adding a new flavor to the Latin-themed festive parade.
Over 40 local performing groups and a dozen from overseas set off from the St. Lazarus’ Quarter, spreading a cheerful ambience all the way to Tap Seac Square.
After nearly two hours’ watching in the street, native Ms Lam and her husband said they couldn’t get enough of the marching performance. “The parade was too short, we haven’t watched enough,” Ms Lam told the Times on their way to the closing performance to be held at the Tap Seac Square.
Asked if they thought the high budget for rolling out such an event was reasonable, she said, “The Macau government has money, so why not invest in such activities. We expect the parade to keep carrying on every year, and they should add more performing groups from overseas.”
Frenchman Mr Jacques and his multiethnic family also loved the annual parade. Every year, they come out to see the procession and cheer on the performing groups that pass by his restaurant one after another.
“You see my restaurant is open but I’m standing outside for the parade,” he stressed, “I think this is very good for the city; we should have this more often.” Jack’s wife Ms Zhong added that a lively carnival featuring Macau’s multiple cultures is “just what the citizens need,” and families with young children particularly favor it.
The couple further suggested that the parade needs more music and dancing performances in the procession, in order to liven up the atmosphere more. “It feels a bit cold here,” Jacques pointed to the crossroad in front, “Chinese people tend to be [a bit] uptight; there should be more music to make people dance and interact with the parade.”
Not only seen as an event on the local entertainment calendar, the parade also turned out as a surprise for some long haul tourists. Ms Thomson from the United States said that she happened to visit the city during the celebration, impressed by its multi-cultural character and the festive atmosphere.
“The performances are very good. I know this is celebrating the 15th anniversary of Macau’s handover to China, and there will be fireworks on December 20th. It’s great to celebrate it this way rather than just serious lectures,” she said.
The event also attracted tourists from neighboring regions who specially came to Macau to experience it. Ms Au Ieong from Guangdong Province brought her young children and husband to see the parade as she enjoyed it last year.
However, the visitor found the display somewhat lacking. “Last year’s edition was better; this year it’s not as good as I expected. And there are more Chinese cultural groups, which for us is less fun,” she commented.
Local family Mr Leong and his wife also found this year’s parade lower than their expectations, as the quality of performances didn’t improve compared to previous editions.
“The performances are really so-so. The kids were excited when they saw it the first time, but it’s not as attractive as it was,” they told the Times, “the organization is also kind of messy this year, as it’s chaos moving in the crowds.” “This is the way the government spends money; it’s good to carry on the event, but they need to make improvements.”