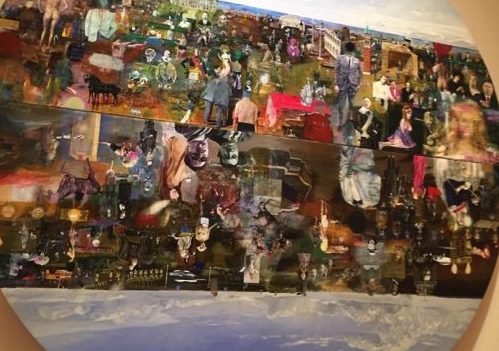 “The Battle of Vegas (Macau)”

The Macao Museum of Art (MAM) inaugurated the contemporary art exhibition “Ad Lib – Recent Works of Konstantin Bessmertny” which is on display at the Gallery of Special Exhibitions of MAM.

The exhibition features a total of 34 recent works by the Macau based artist Konstantin Bessmertny in such forms as paintings, sculptures, installations and mixed media, offering viewers a bustling and humorous visual feast until May 28.

In addition, guided tours in Cantonese will be held on the weekends and public holidays from November 26, between 3 p.m. to 4 p.m. Guided tours reserved for groups and schools, along with the “Amusing – Children’s Guided Tour Programme”, will be available from November 29.

“Ad lib” is an abbreviation of the Latin “ad libitum”, and is an expression pertaining to liberty. The application of the term in the exhibition title shows that the artist does not wish to give the exhibition a definite theme. Instead, he chooses to give viewers an unexpected and entertaining collection aimed as a response to different phenomena happening in society.

Konstantin Bessmertny was born in Blagoveshchensk, USSR in 1964 and graduated from the Institute of Fine Arts in Vladivostok, specializing in classical painting and has resided in Macau for over two decades. His profound studies of dimensions and cultures in the fields of literature, music, history, politics, are reflected in multiple mediums and with great precision and intelligence.

Bessmertny said on Friday that it has been a long time since he last exhibited in Macau. “I have more time to specially select and exhibit works that can be best understood and appreciated in Macau, some of them are site specific and are specially produced to be shown just here,” the artist said.

The artist said that he was thankful to the museum, which gave him the privilege to use the place to show the public his art pieces. “The Macao Museum of Art for me is the best exhibition platform in Macau,” he confessed.

Leung Hio Ming, the vice president of the Cultural Affairs Bureau, said that “Bessmertny has been an old friend of Macau’s art world and a member of the society of Macau.”

Leung also said that some of Bessmertny’s works will be shown in different public spaces such as libraries, squares and other recreational spaces. JZ

The artist (left) presents his works to the IC vice president