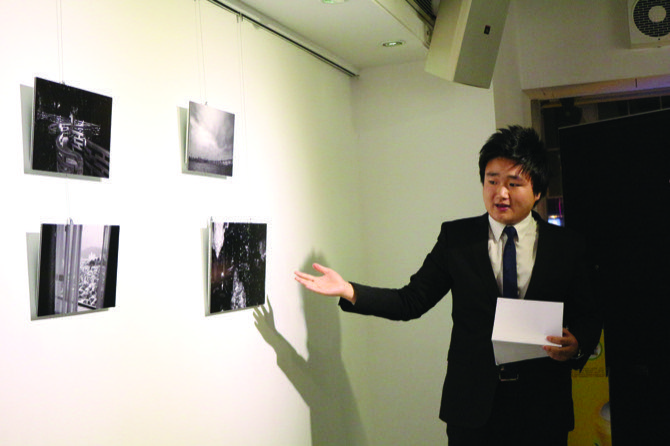 Sa Ng, manager of the cultural affairs of AF, talk about the photographs on display

A photo exhibition that seeks to capture the stories of the city began at the Rui Cunha Foundation yesterday, showcasing 24 photographs of the region through the perspective of a first-timer in the SAR.

The Alliance Française de Macao (AF) invited Christophe Charpenel, a photographer in the world of jazz to create the exhibition, titled “First Impressions”.

According to AF, he is known for his ability to capture moments in the fast-paced language of improvisation. He has worked with many jazz artists previously.

“The idea of this project was to have him jump out of his comfort zone, to switch roles, acting as the improvisers that he usually works with,” AF noted.

Charpenel was invited to Macau for a one-week residency to complete the project, yet no specific instructions or suggestions were given to him.

Sa Ng, manager of the cultural affairs of AF, explained that the organization only took him on a tour of the city for a day in October, showing him the streets and atmosphere of the whole city.

After nearly a week, the photographer had captured a series of photographs that tell the story of local residents, places in the SAR and general happenings.

“Christophe has been mainly [active] in the jazz scene in Europe and America. He has the ability to capture the soul of that moment, so we gave him a challenge to come to Macau and instead of him shooting […] the improvisers, we want to see what he can come up with if he is the improviser,” Ng explained.

“[The exhibition] sums up that [Macau] is not just what outsiders would usually see, but Christophe was really able to capture some soulful moments,” he added.

According to Ng, the association has further plans of showcasing art in Macau to connect the city to France and Europe through the platform.

The current exhibition, which will run until March 19, will also be showcased at local institutions and universities.

“First Impressions” will also be showcased in France after exhibiting in the city.

“We will bring this to France and show them a side of Macau. For us, we’re really not just into bringing France to Macau, but we want to bring Macau to France as well,” Ng explained.

Ng said that AF is continually working to strengthen the connection between the two regions, which includes bringing European artists to the SAR. LV