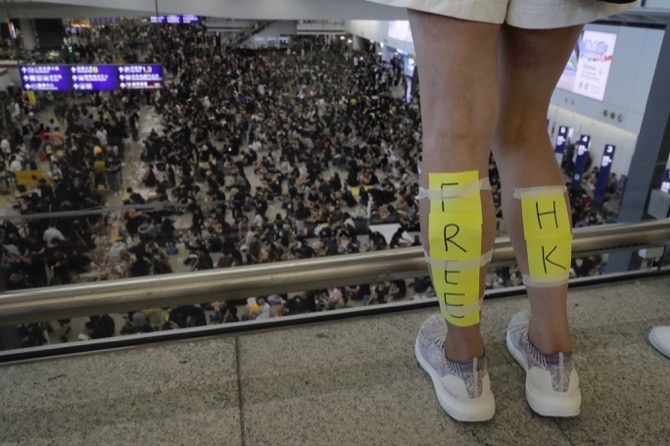 After the protesters evacuated, residents took their place.

In one Hong Kong neighborhood on Saturday, riot police fired multiple rounds of tear gas, prompting demonstrators to flee after they started a fire outside a police station and threw eggs at its exterior. But while the pro-democracy protesters left to occupy yet another district, the residents who were watching from the sidelines descended by the hundreds.

They watched as officers grabbed a woman who was wearing neither a black shirt nor a mask — the telltale attire of a protester. The crowd surrounded the police and yelled: “Let her go! Let her go!”

More than two months of mass demonstrations in Hong Kong have given way to routine clashes between protesters and police. As protesters lead police from neighborhood to neighborhood, leaving hastily constructed roadblocks in their wake, residents across the districts have increasingly been caught in the fray.

Not all are supportive of the movement, which began in June against an extradition bill that would have allowed Hong Kong residents to be sent to the mainland to stand trial. It has since morphed into calls for broader democratic reforms and violent acts of defiance against police, who in turn have been accused of excessive force and deliberate negligence.

“I support them, though I don’t agree with all their methods,” Annie Chan, an accountant, said at a shopping plaza that protesters briefly occupied. “Most of us middle-aged people understand that the younger generation feels helpless.”

Police used tear gas to disperse protesters who blocked roads and one major cross-harbor tunnel and arrested 16 people for unlawful assembly, possession of offensive weapons and assaulting and obstructing officers.

Following a pattern established in past weekends, the demonstrations continued into the night despite police refusal to grant permission for the gatherings.

Tear gas was fired at a crowd of some 1,000 people in a brief evening standoff at a commuter rail station in Tai Wai. In a separate incident, police lobbed tear gas at protesters who surrounded a precinct in the Tsim Sha Tsui district on the northern side of Hong Kong’s harbor, opposite Hong Kong Island.

Earlier marches went ahead in two areas despite a police refusal of permission.

A former British colony, Hong Kong was returned to China in 1997 under the principle of “one country, two systems,” which promises the city certain democratic rights not afforded to people on the mainland. But in recent years, some have accused the Communist Party-ruled central government of steadily chipping away at their freedoms.

Wong, 73, was among protesters carrying British, Taiwanese or U.S. flags. Some chide them for playing into Beijing’s claim that hostile foreign forces are behind the demonstrations.

Of those accusations, Wong said: “I don’t care what the government says. They will say anything.”

Demonstrators say they no longer trust authorities after 44 civilians were injured in a mob attack at a commuter rail station last month. The assailants were all dressed in white in an apparent rebuttal to the protesters’ trademark black.

Police have arrested more than 500 protesters since early June on charges such as unlawful assembly, carrying weapons and rioting, which carries a maximum penalty of 10 years in jail. On a shopping street Saturday, hundreds of people who appeared to be local residents and passers-by surrounded police officers who arrested a woman. They did not respond to the crowd’s questions about why she was being arrested.

The angered residents booed and shouted one of the movement’s catchphrases: “Hong Kong police know the law and break the law!”

Earlier in the day, a Hong Kong-based association of people from southern Fujian province gathered around police stations to show their support for law enforcement. They held up large in Chinese flags and signs that read, “Support the Police Line, Firmly Enforce the Law.”

Also on Saturday, several thousand people continued the second day of protests at Hong Kong’s busy international airport. They chanted slogans, set up TV sets to show video of recent protests and handed out leaflets explaining the controversy over the proposed extradition law and demands for universal voting rights.

In another district, a group of parents staged a separate march that was approved by police. They called for better protection for children following incidents in which ordinary people have been caught in clashes between police and protesters.

“It’s dangerous to bring my child to participate in any protest,” said Natalie Lee, who was with her 2-year-old daughter. “Today’s march provides a good opportunity for us to bring our children to voice our demands and I hope more peaceful protesters will come out too.” Yanan Wang, Hong Kong, AP