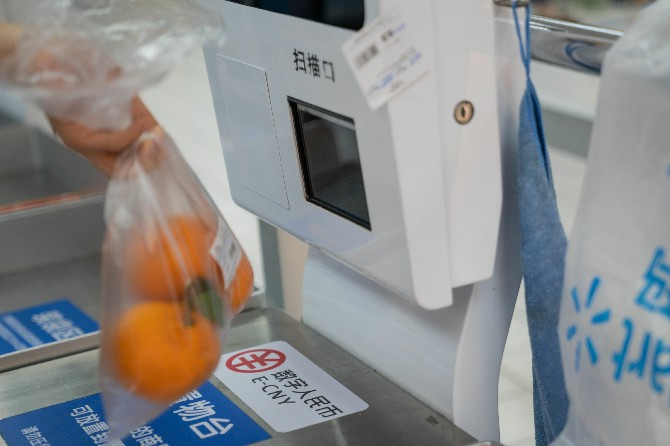 Hong Kong and China are in discussions to further expand the scope of cross-border technical testing of the digital yuan, also known as digital RMB, following its first phase, according to a report published yesterday by Bloomberg.
In an e-mailed reply to Bloomberg, the Hong Kong Monetary Authority (HKMA) unveiled that it and the Digital Currency Institute of the People’s Bank of China (PBOC), along with a bank designated by the mainland authority and merchants, had teamed up to carry out the testing of digital RMB.
“We have tested the use of the related app, system connectivity and certain use cases such as cross-boundary purchases,” HKMA said.
In the coming testing phase, HKMA will explore opportunities to augment the use of digital yuan for cross-border transactions, and said it is already “discussing and collaborating with the PBOC” on the effort.
According to the latest report published by international management consulting firm Oliver Wyman, the digital RMB in Hong Kong may usher in an era of a quicker, cheaper cross-border payment and clearing processes.
Citing Oliver Wyman, Bloomberg estimates that the total costs related to cross-border payments in Hong Kong are $20 billion to $40 billion annually, or up to 11% of the city’s gross domestic product in 2020.
“In the near-term, we expect little change given the market structure and PBOC’s focus on consumer sectors. But in the longer term we expect change to accelerate, especially in areas such as Greater Bay Area (GBA) – which is already a hot-bed of innovation – and increasing integration with on-and-offshore markets. Here we expect payment infrastructure integration to start, beginning with retail but quickly moving into B2B,” the report stated.
The collaborative venture between HKMA and China’s central bank for cross-border testing of digital RMB was first announced by Wang Xin, director of the Research Bureau of the People’s Bank of China (PBC) in April at a press conference in Beijing.

Macau lagging behind
When stacked against its counterpart, it seems Macau has fallen behind on the implementation of the digital yuan.
On April 13, Macau’s Chief Executive Ho Iat Seng unveiled that the Macau SAR government and the PBOC had begun examining the feasibility of bringing digital yuan into Macau. However, he did not specify a timeframe for its roll-out.
Ho stressed that the government already has plans in place to amend relevant legislation to better regulate the issuance of digital legal tender.
The use of digital yuan in Macau, Ho stressed, is intended to more effectively combat money-related unlawful acts, such as money laundering, tax evasion and the financing of terrorism.
Florence Lei, assistant professor of the Faculty of Business and Law at the University of Saint Joseph (USJ) said in an earlier finance-themed sharing session that the utilization of digital yuan will propel the whole Greater Bay Area into an era of more robust financial integration.
She explained that whenever there is a change from traditional payments to digital payments, the velocity of money flow increases, resulting in more transactions processed at any given time.
Some in Macau fret that the use of patacas may eventually be replaced by digital yuan after its enactment. However, Lei rebutted the belief, clarifying that digital yuan — to be exact — is just a form of payment.
The most important factor for whether patacas would be replaced by digital yuan is how people undertake the transactions.
She also confirmed that the digital yuan is unlikely to cause inflation. “From an economic perspective, money is liquidity. Digital currency is still creating liquidity. We’re not creating wealth. We are talking about the form of payment.”