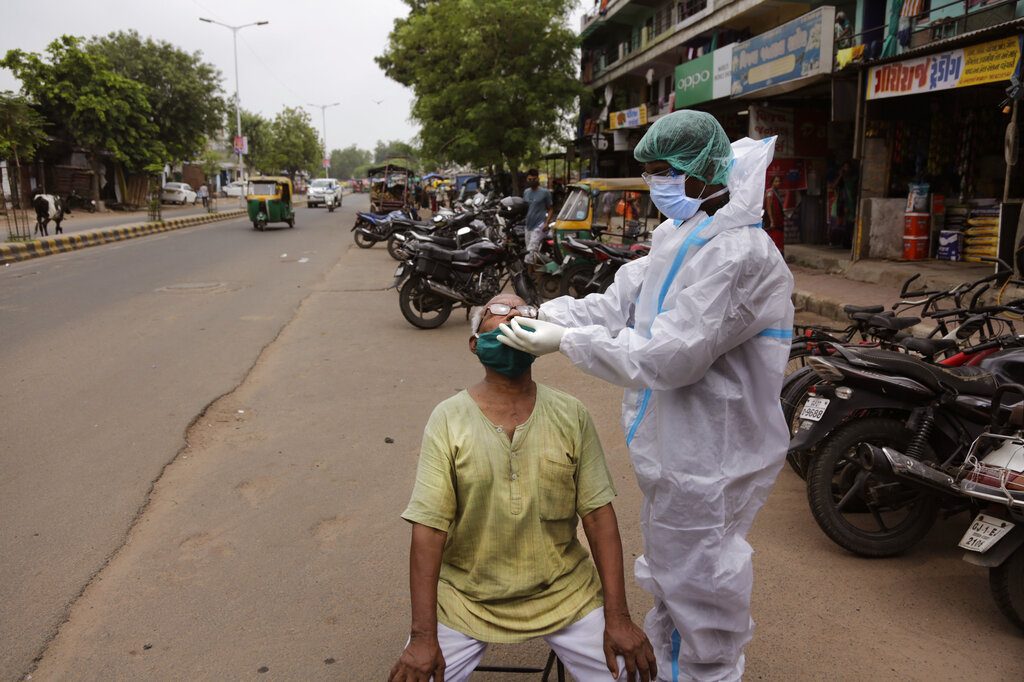 An Indian health worker takes a swab sample of a man for COVID-19 test on a street in Ahmedabad, India (AP Photo/Ajit Solanki)

NEW DELHI — India began its first human trials of a novel coronavirus vaccine candidate as the world’s second-most populous country recorded nearly 49,000 new cases.
The additional infections take India’s total to more than 1.3 million today (Saturday), with surges seen in a quarter of the country’s 36 states and union territories.
India has tallied 31,358 deaths, including 757 in the last 24 hours. It has reported a much lower death rate than the world’s two other worst-hit countries, the United States and Brazil. Johns Hopkins University showed that the U.S. has more than 4.1 million cases, while Brazil has a caseload of nearly 2.3 million.
The All India Institute of Medical Sciences, a premier teaching hospital in the capital of New Delhi, says it has administered the first dose of a trial COVID-19 vaccine on Friday.
The candidate vaccine, Covaxin, is among nearly two dozen that are in human trials around the world. AIIMS is among the 12 sites selected by the Indian Council for Medical Research for conducting the two-phase randomized, double-blind, placebo-controlled clinical trials of Covaxin.
Countries are making giant bets on various vaccine candidates, entering into purchasing agreements with pharmaceutical companies for delivery if and when regulators deem the doses safe and effective.
In other developments in the Asia-Pacific region:
— South Korea reported 113 newly confirmed cases of COVID-19 over the past 24 hours, its first daily jump over 100 in nearly four months. Health authorities had forecast a temporary spike driven by imported infections found among cargo ship crews and hundreds of South Korean construction workers airlifted out of virus-ravaged Iraq. The figures released by South Korea’s Centers for Disease Control and Prevention Saturday brought the national caseload to 14,092, including 298 deaths. The KCDC said 86 of the new cases were linked to international arrivals while the other 27 were local transmissions. It said the imported cases included 36 South Korean workers who returned from Iraq and 32 crew members of a Russia-flagged cargo ship docked in the southern port of Busan. South Korean officials consider imported cases as less threatening than local transmissions because of mandatory tests and a two-week quarantine for all overseas arrivals.
— Five more Victoria residents died from COVID-19 as the Australian state recorded 357 new cases in the past 24 hours. Premier Daniel Andrews refused to rule out further restrictions but said Saturday the mandatory wearing of masks was the current strategy to stop the spread. “If they are worn by everybody, we may not need to go further,” Andrews said. “We can’t rule out going further with rule changes, but it’s a big game changer.” There are now nearly 4,000 active cases in the state and of those, 313 are health care workers. The deaths take the state toll to 61 and the national figure to 145. Victoria recorded 300 new cases on Friday, down from 403 on Thursday.
— China on Saturday reported 34 new confirmed coronavirus cases. The total reported in the 24 hours through midnight Friday includes five people who caught the virus abroad, the National Health Commission said. No additional deaths were reported, leaving China’s fatality toll at 4,634.
— Vietnam has reported the first local case of COVID-19 in over three months. The 57-year-old man from central Da Nang city was hospitalized on Thursday with a fever and respiratory distress. The Health Ministry says his condition worsened and he was put on a ventilator. Health workers have not been able to trace the source for his infection. For over a month, he did not travel outside his hometown, where no case of COVID-19 has been reported since April. Da Nang city authorities have isolated the hospital he had visited and those who had been in contact with the man in the past weeks. His family members and over 100 others have initially tested negative for the coronavirus. The news of a local infection after most activities had resumed in mid-May caused many to cancel or prematurely end their holidays in Da Nang, one of Vietnam’s most popular beach destinations. Vietnam has reported 416 confirmed cases and no deaths.

— Ricardo Goulart, a Brazilian striker who plays for Hebei China Fortune, faces a possible fine after taking photos with fans without a face mask, a state news agency reported Saturday. The 29-year-old Goulart, who previously played in Italy, was in the eastern city of Suzhou to prepare for a season opener. On Friday, he posed for photos with fans without a mask, the Xinhua News Agency said.